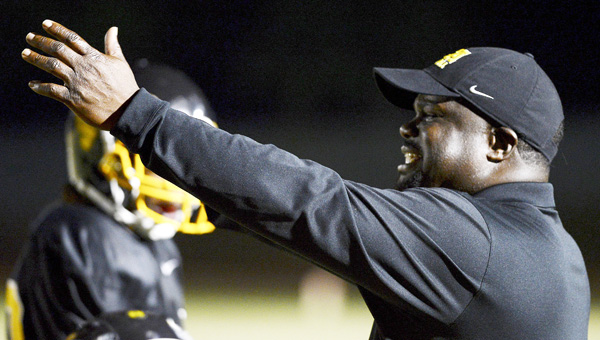 Former Ellwood Christian Academy head football coach Mike Stokes has been named the school’s interim coach, according to the Rev. Gary Crum, who serves as chairman of the school’s board. –File Photo

Ellwood Christian Academy has named Mike Stokes as its interim football coach, according to board chairman Gary Crum.

The interim label could be removed from Stokes’ title as early as next week, Crum said, but a board meeting has to take place first. Stokes coached Ellwood Christian when the school was in the Alabama Independent School Association in 2011 and through its transition to the Alabama High School Athletic Association in 2012 and 2013.

Stokes was replaced with Eric Martinear for the 2013 season.

“As of now, coach Mike Stokes is interim,” Crum said.

Crum said the school is not accepting applications for the head football coach position. The Ellwood Christian board could meet as early as Monday, Crum said, and will discuss naming Stokes the head coach.

“It’s going to be handled in house,” Crum said.

Pike left the school after one year to take a position with St. Clair County after his contract was not renewed at Ellwood due to the school’s uncertain enrollment. Ellwood Christian went 3-7 last season under Pike and missed the playoffs.

“I was happy for him,” Crum said of Pike’s new position. “It’s always good to be closer to home.”

Crum said the plan was to rehire Pike once enrollment numbers became more clear for the upcoming school year. Crum said those numbers are now much clearer.

“He’s got the experience and he played at Tuskegee,” Crum said of Stokes.

Stokes coached the team to a 2-8 record in 2013 in his last season as head coach.

The Eagles went 12-21 in his last three seasons.

He led Ellwood Christian to the school’s first ever AHSAA playoff appearance in 2012. If Stokes is named the Eagles’ head coach, he would be the third head coach in the last three seasons.