Selma offense still a work in progress after 7-on-7 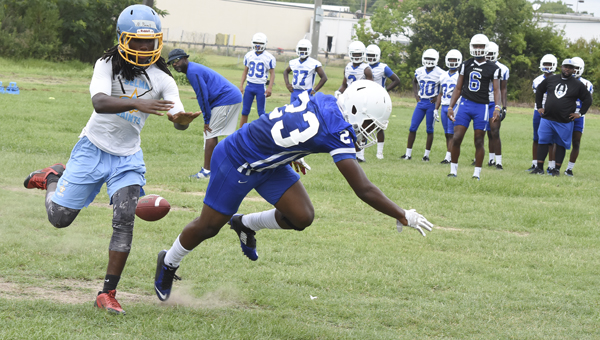 Selma High School football coach Keon Handley is confident his team’s defense is going to be stout. He’s mainly worried about the offense coming together.

The Saints hosted a 7-on-7 Wednesday with Sidney Lanier, which gave Handley another look at how his team’s transition to a spread offense is going.  The results were mixed.

In one-on-one drills between wide receivers and defensive backs, Handley said it took the Saints’ offense a few minutes to match the physicality of Lanier’s defensive players, who made it difficult for receivers to get off the line. However, once Selma started figuring it out, the Saints wide receivers got loose and made catches well down the field.

“We are still trying to figure out some things in the passing game,” Handley said. “The passing game is new to a lot of these kids, which was to be expected. Offense takes longer than defense.”

Selma is in the midst of moving from an I-form, run-based offense to Handley’s spread, up-tempo offense. One of the biggest changes is the passing game, which will be featured a lot more than it was last season when Selma preferred to run the ball as much as possible.

The team spent the first part of this week in a team retreat at the high school, learning the playbook and getting to know one another.

“We were able to fix some leadership quality issues and teach young men how to be leaders,” Handley said. “We were able to spent that time with them and give our expectations. That was our No. 1 goal — how do we become closer? How do we depend on each other more?”

Handley said the team came out of the camp closer as a team.

Now, he’s trying to get in the rest of his offense before the team’s opener against Southside on Aug. 19. One thing that might help is Selma’s defense, which he thinks will once again be the team’s strength.

Last season, the Selma defense was the team’s anchor under coach Leroy Miles. Selma allowed just under 20 points per game last season. One month before the season gets underway, Handley is confident the team’s defense will again be able to carry the Saints.

“As the head coach when I evaluate my team, my defense is my strong suit. I feel like if we score anywhere from 14 to 21 points, we are going to win,” Handley said. “I have that kind of confidence in our defense but eventually the offense is going to catch up to the defense as far as tempo, timing and things of that nature.”

The offense also had its bright spots, including senior quarterback Kordez Ervin.

Ervin took every snap at quarterback in one-on-one drills and also the majority of them in 7-on-7.  Handley said he’s likely to be the Saints’ starting quarterback this season. He said Ervin is checking the protection and noticing where the defense’s safeties line up, traits that show his progression.

“He put guys in the right position. He still has some mechanical flaws that we are working on,” Handley said. “I’m going to still try to get some work with him one-on-one.”

The Saints wrapped up their offseason program with the 7-on-7 and will go into regular season practices next week.