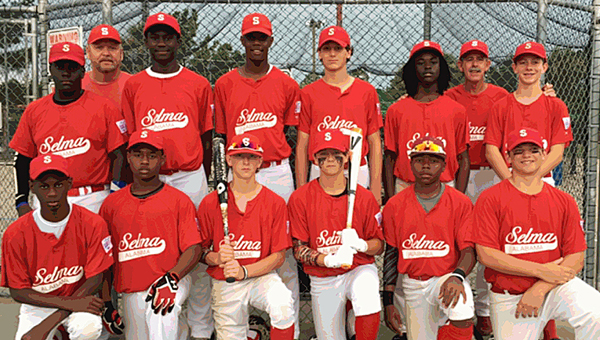 Selma led throughout the game, but had to hold off a big Decatur rally in the final inning. The lead was cut from 15-8 to 15-13 in the top of the seventh inning, but Selma used four pitchers to hang on for the win.

Xavier Green hit a two-run home run and Octavious Palmer pitched the majority of the game to lead Selma to the win, but every player on the team contributed.

Head coach Ricky Waters said every player on the team has batted and played in the infield during the tournament.

“All 12 kids have got to play in the field and at-bat and I’m really super proud of them and happy for them,” Waters said.

Selma will play Enterprise at 11 a.m. Wednesday in Dothan in the Dixie Boys Championship, with a chance to win the city’s first state title since 1981. If Selma loses that game, a second game would be played directly after with the winner taking the championship.

Waters played on the last state championship team in Selma, so he’s been in this situation before.

“They are so close to making a mark in history as far as baseball goes in the Selma program,” Waters said. “It’s like I tell my guys, this is something you’ll remember the rest of your life. You’ve got to enjoy the progress but finish it.”

The team has already defeated Enterprise once in the tournament, winning 4-0 on Monday morning.

The Selma pitching staff is in good shape going into Wednesday.

Waters has numerous arms available, something he showed by pitching four players in Tuesday’s win.

Only Palmer isn’t eligible to throw after reaching the pitch limit for the tournament. Milam Turner, Amarion Molette and Adarricus Tate all pitched during the seventh inning of Tuesday’s win. Molette recorded the final out.

Enterprise defeated Dothan Tuesday to make it into the championship round of the tournament.