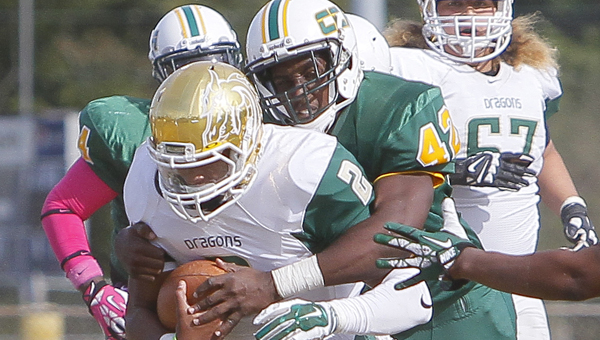 Concordia College Alabama’s Cameron Walton tackles a running back for Tiffin during a game last season at Memorial Stadium. Walton is one of six players nationally eligible for the NFL’s supplemental draft. –File Photo

When Concordia College Alabama announced in December that it was ending its football program, Hornets’ defensive end Cameron Walton feared his playing career was over.

“I thought I was back at square one again,” Walton said. “I didn’t know what I was going to do.”

Walton, a rising senior, tried to transfer, but he said he didn’t have enough credit hours to do so. When that fell through, he applied for the NFL’s supplemental draft, which is for players that did not enter the NFL Draft and had various circumstances affect their ability.

A few weeks ago, he found out he was one of six players nationally that are eligible for the draft. He’s calling it “a big second chance.”

“Out of 300 people, there were six people chosen,” Walton said. “That was God’s gift man.”

The draft will be held July 14 and does not operate like the normal NFL Draft. Any team that selects one of those players would forfeit a matching pick in the 2017 regular draft. In some years — and as recently as 2014 — no picks were made in the supplemental draft.

A total of 46 players have been drafted since the supplemental draft started in 1977. The last was Clemson’s Isaiah Battle, who was drafted in 2015 by the St. Louis Rams. Among the notable players taken in the supplemental draft include Pro Football Hall of Fame wide receiver Cris Carter, wide receiver Josh Gordon, quarterback Terrelle Pryor and quarterback Bernie Kosar.

Walton likes his chances of being the 47th player picked.

“It would mean a lot coming from a single parent home,” Walton said. “It would be great to take care of my family and my mom. It would be a dream come true.”

Stanley Conner, who coached the Concordia College Alabama football team and still works in the school’s admissions department, said Walton finished last season with around 20 sacks. NFL teams see him as a guy that can help pressure the quarterback.

“He’s a tremendous pass rusher and in the NFL you’ve got to have that guy who can rush the passer,” Conner said.

Walton played only one year at Concordia after transferring from Eastern Arizona Community College, where he had 60 tackles in 11 games.

NFL teams have learned about him by watching his tape on Hudl and by calling Conner, a veteran football coach that once coached current Indianapolis Colts’ defensive end Robert Mathis at Alabama A&M. Conner said Walton is a similar player to Mathis.

“When I mention Cam’s name in the same breathe as his name, everybody wants to really take a look because Robert is one of those special athletes,” Conner said.

Conner said he’s been on the phone all weekend talking to teams about Walton, who estimated he’s spoken to 22 of the league’s 32 teams.

Walton will hold a pro day July 11 at North Augusta High School in South Carolina. It’ll be one last chance for him to leave his mark on a NFL team.  Then on July 14, he’ll be hoping to get a life changing phone call.

“I’m going to sitting around with my phone in my hands, just waiting,” Walton said.