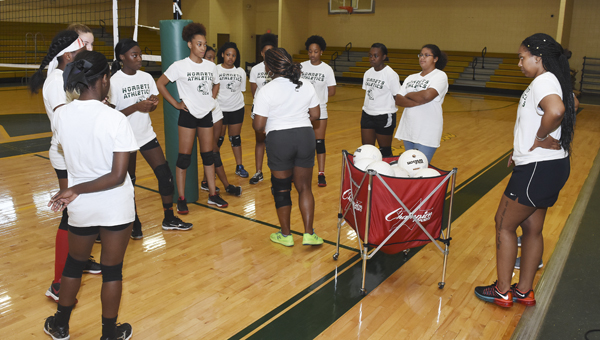 Concordia College Alabama’s volleyball camp was originally scheduled for three days, with each geared toward a different age group.

When Concordia head coach Katasha Turner didn’t get the response she hoped for from the younger children, she had to make a few adjustments.

“I wanted to start at a younger age with the younger kids, but that didn’t happen. You have to make lemonade out of lemons and that’s OK,” Turner said.

As it turns out, the camp ran just fine, even if it was a few days shorter than originally planned.

About a dozen girls from Southside High School, Selma High School and Hale County High School took part in Wednesday’s camp and due to the small group participating, they got hands on experience from college and high school coaches throughout the day.

“It’s helped a lot because the teachers tell us how they weren’t that good when they started or they aren’t where they are now and other people came and helped them,” said Southside High School’s Amari Drane. “They are passing it down. It’s helping me because I’m able to apply it on the court.”

The campers took part in all kinds of volleyball drills, including setting, passing and serving, but they also had some fun. In one fun activity Turner drew up, players had to jump over, run under and sprint around teammates.

Wednesday’s camp was the first Turner had organized at Concordia. She said she didn’t sleep much Tuesday night, but was proud of how it all came together.

“Even though it’s a small group, it helps them get a lot of touches on the ball and a lot of hands on activity with the coaches and seeing different views from every coach,” Turner said.

She said if the camp returns next year Concordia will start spreading information to the local schools earlier.