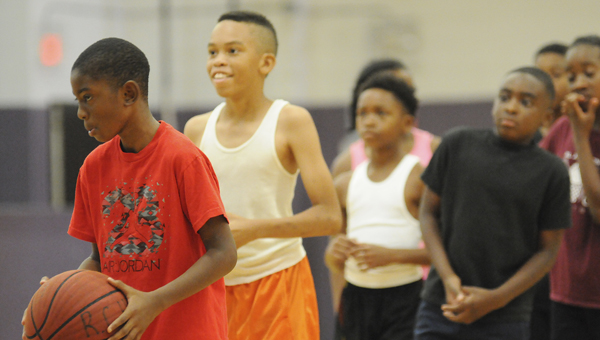 Children line up to shoot the ball during the 2015 Camp of Champions, hosted by former University of Alabama basketball player Erwin Dudley. The camp will take place for the 10th year on July 8 and 9 at the R.C. Hatch gymnasium.

Erwin Dudley spends his professional career in Turkey playing basketball, but he never forgets where he’s from. The 1999 R.C. Hatch graduate is back in Uniontown this July for the 10th straight year of giving back to his community, even though he now lives thousands of miles away.

“Being over there, I miss home a lot, so when I do come back home, it gives me the opportunity to give back to the kids and be more grateful for them,” Dudley said.

The two-day camp will include 3-on-3 and 5-on-5 drills, and there will be an anti-drug presentation each day from noon-1 p.m. to educate the children who attend.

Dudley is a 2003 graduate at the University of Alabama, where he played basketball and finished seventh all-time in scoring for the Crimson Tide and fourth in rebounding. During his career at Alabama, he was named an All-American by the Associated Press, a Southeastern Conference Player of the Year and a unanimous All-SEC first team selection.

Dudley led the SEC in rebounding for three consecutive seasons, and was the first player to do so since Shaquille O’Neal at Louisiana State University.

In 2004, Dudley began his professional career with Maccabi Rishon Lezion in Israel, and in 2005, he signed with Turk Telekom and played there for three consecutive seasons to earn his Turkish citizenship.

He plays under the name Ersin Dagli and will be entering his 13th professional season this fall. Dudley said his team has had success making it to the semifinals of the playoffs this past season after moving up a division just two seasons ago.

Each year, Dudley said he gets more sponsors to help out with the camp. This year, he will have multiple giveaways for the kids, including a game-worn jersey from this past season in Turkey.

Dudley said as much as he enjoys coming back and giving to the community that helped teach him the valuable lesson of hard work, the kids who come to the camp enjoy their experience as well.

At least 150 kids are expected to attend this year.

“They come out here. They support it. They like being a part of it, so that’s why I put it on,” Dudley said.