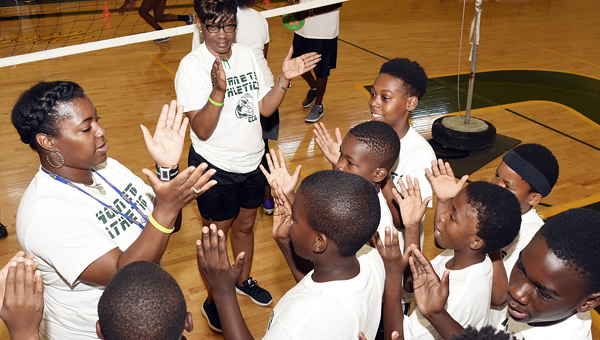 Above, Concordia College Alabama volleyball coach Katasha Turner claps in a huddle with campers during Tuesday’s All Day Sports Camp. Below, Michael Brown hops throiugh an agility drill during the football portion of the camp. — Daniel Evans

Child after child ran through the agility-training ladder Tuesday during Concordia College Alabama’s All Sports Day, but many of them were going too fast.

“You’ve got to get in and then get out. You never got out,” said Concordia’s Stanley Conner, who led the football portion of the event.

Conner, who coached the school’s now defunct football team, was referring to each player’s footwork during the drill, which required a player to step into a square with both feet, step out with both feet and then move onto the next square. Most players managed to step correctly the second time around, after being shown what they did wrong the first time.

“It will help me a lot with my footwork, especially because the position I play in football,” said Ellwood Christian student Michael Brown, who plays guard and defensive tackle.

Footwork and football were only a portion of Concordia’s All Sports Day, which also included soccer, volleyball and cheerleading. The event was a partnership between Concordia and the Selma Housing Authority and gave students from around Selma a chance to get out of the house and onto a college campus.

A total of 28 students took part in the camp. Although the college was prepared for 300, athletic director Dr. Donald Jefferson was pleased with the turnout.

“I think for a first camp it’s a pretty good start, and we’ll continue to build on it,” Jefferson said.

Those who did take part seemed to enjoy themselves.

“The thrill is always the kill shot in volleyball,” Turner said, while comparing the play to basketball’s 3-pointer. “The passing is OK, you set but when you can get the kill shot and hit that’s what they look for.”

Jefferson said during the fall, Concordia will start spreading information to schools about next year’s camp.

John Solomon, who serves as the director of resident services for the Selma Housing Authority, said next year they may move the camp later into the summer.

However, he was also glad to see many children enjoying a day outside and exploring a college campus.

“Most of the kids in our area don’t have the money to pay to go camp,” Solomon said. “This was a way we could get them out, go to camp, get a chance to come on a college campus and see how things are done, get a T-shirt and get some other things and have a great day.”