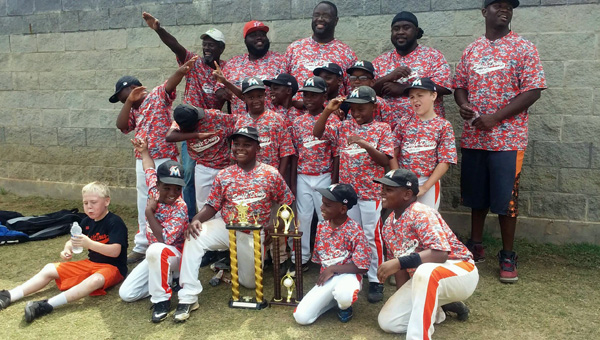 Sample hit a line drive over first base and brought home two of his teammates, putting the final touches on a four-run comeback that gave Swift the win and the championship.

Swift head coach Calvin Pritchett said Sample’s hit was probably going to be an inside the park home run, but players, coaches and family members grabbed him in celebration before he could run around the bases.

“Everybody got him. His daddy picked him up on his shoulders and ran around the field with him,” Pritchett said.

Swift only lost two games the entire season. The Marlins lost to Captain D’s the first time the teams played this year in a game that played out much like Saturday’s championship game. The team’s other loss came off a forfeit.

“I knew all the time they could do it,” Pritchett said. “I’ve got a great group of guys who played hard and practiced hard.”

During Saturday’s game, the team found itself in a big hole late. The game went six full innings and Captain D’s led 11-8 going into the final half inning.

“We hit the ball and [played] defense,” Pritchett said. “My team is spectacular hitters too.”

Swift Drug defeated Cougar Chevron and Selma Crossfit on its way to the title. Captain D’s was the league’s regular season champion.

After two thrilling playoff games, the coaches of Mee Too and Dallas Avenue Pharmacy elected to declare the teams co-champions of the city’s 11-and 12-year-old baseball league instead of battling it out in a winner-take-all finale on Tuesday night.

Dallas Avenue Pharmacy defeated Mee Too 7-3 Tuesday, nearly a week after Mee Too had battled back from a late five run deficit to stun Dallas Avenue in a semifinal game.

After Dallas Avenue’s win Tuesday, the teams were expected to play a final contest to decide the outright champion. Instead, the coaches elected to declare it a tie and name both teams champions, according to city baseball director Gerald Barron.

In the game played Tuesday, Dallas Avenue found itself in a early hole after Ben Feister led the game off with a home run for Mee Too.

Dallas Avenue battled back with four runs in the first inning and didn’t trail the rest of the way.

Derrick Brown and Christopher Ezelle scored in the fifth inning for Mee Too on passed balls, but unlike last week, the Giants couldn’t keep the rally going. Joshua Brown pitched the final inning and closed the game out for Dallas Avenue Pharmacy.

There was a lot on the line for players from Neely Charter in Tuesday night’s 9-and 10-year-old baseball championship against KFC.

Not only was there was a championship on the line, but also a trip to Six Flags. With so much to play for, Neely overcame an early 3-0 deficit to defeat KFC 13-5 to win the title.

Now the team can set its sights on more important things — like its upcoming trip to the Atlanta theme park. Neely head coach James Spears said the team’s sponsor, Neely Charters, is paying for the trip.

“They are just enjoying it, and they are ready to go to Six Flags now,” Spears said.

KFC actually led 4-1 in the third inning before Neely rallied to tie the game. Roosevelt Sanders walked with the bases loaded to give Neely its first lead of the game, although KFC tied it in its next at-bat on a passed ball.

The game was called at that point because at the 9-10 age group, teams are limited to seven runs per inning and KFC had only one more half inning to play.

Spears credited the six 10 year olds on the team that led the way at the plate.

“They stepped up and did what they were supposed to. They didn’t want to play a second game,” Spears said.