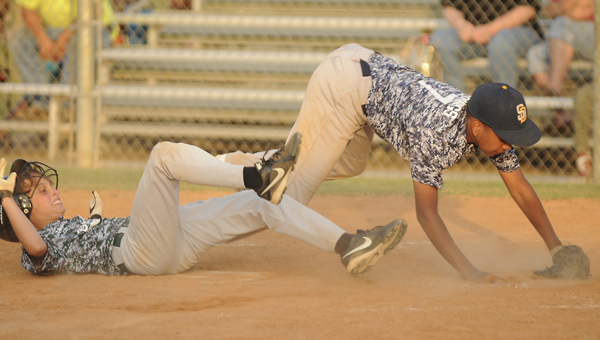 Matthew King, left, of the Bent Tree Athletics, slides safely home in the 11-12 year-old league in a youth baseball playoff game Monday at the Sportsplex, as Co-Op Padres pitcher JaMichael Goings, right, tries to tag him out. Bent Tree advanced to the winner’s bracket with an 18-11 victory. — Justin Fedich

The youth baseball and softball playoffs began at the Sportsplex Monday, and Bent Tree and Co-Op started the 11-12 year-old league’s baseball playoffs by scoring 29 combined runs in four innings.

In the first round of the double-elimination playoffs, Bent Tree defeated Co-Op 18-11. Every player in the Bent Tree lineup got a hit, while pitcher Clay Beers kept Co-Op from scoring more than four runs through three innings.

While Bent Tree was in control most of the game, Co-Op managed to score the first four runs. In the top of the first inning, Darrion Melton drove home Kevin Harris with an RBI single down the third base line to give Co-Op a quick 2-0 lead. A Brenton Oliver fly ball to deep right field brought Melton home, making it 4-0.

“We improved a whole lot this year,” said Co-Op head coach Darrio Melton. “We’ve got a lot of first year players, so I’m proud of them.”

Bent Tree tied the game in the bottom of the first inning without any outs on the board. Clay hit an RBI double, sliding safely into second base and giving Bent Tree its first lead of the game.

Clay and Alston Moring both scored off errant pitches to put Bent Tree ahead 7-4 before the end of the first inning.

In the top of the inning, Clay held Co-Op to only one hit, as Bent Tree was able to hold its three-run advantage going into the bottom of the second inning. Nathan Johnson drove home two runners with a base hit to extend the lead to 10-4, and a Trent Mims base hit allowed Robert Beers to score safely.

Moring followed with a double that allowed Clay to reach home plate for the second time, pulling Bent Tree in front 14-4.

Bent Tree was able to keep Co-Op off base in the top of the third inning, as Clay pitched his second straight no-run inning.

Bent Tree added three runs in the third inning, as Noah Smith drove home two runners and Robert scored on a pitch that got past the catcher to make it 17-4.

In the top of the fourth inning, Co-Op was able to draw multiple walks to narrow the score. Harris and Dylan Walker strolled home on bases loaded walks, and Co-Op eased its way up to 11 runs.

Bent Tree, however, closed out the inning without allowing any more runs.

Bent Tree advances in the winner’s bracket, playing the winner of Dallas Avenue Pharmacy and VFW, who played Monday night following the game between Bent Tree and Co-Op.

Coach Smith said he believes Bent Tree has a good chance to win the championship in the seven-team league.

“We beat everybody at least once, so we’ve got a pretty good shot at it,” Smith said.

Co-Op will face the loser of Monday’s game between Dallas Avenue Pharmacy and VFW. Although no team wants to be in the loser’s bracket early, Coach Melton was happy with the way his team fought Monday.

“The only thing I could ask is for them to give their best effort.”

The playoff brackets for all the youth baseball and softball leagues were not made available Monday.

For a more extensive look at the youth baseball and softball playoffs, see Wednesday’s sports section of the Selma Times-Journal.