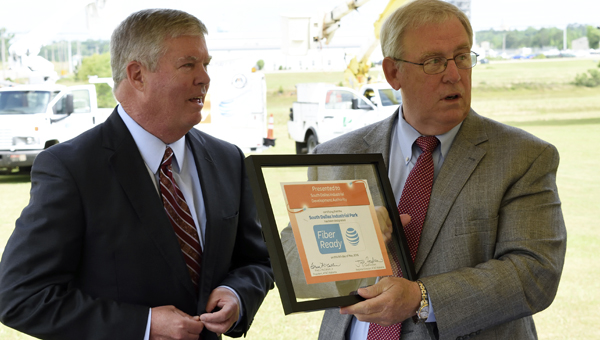 The South Dallas Industrial Park has been certified as AT&T fiber ready.

Fred McCallum, the president of AT&T Alabama, made the announcement Monday morning in front of Pioneer Electric, where he was joined by many local officials and representatives from AT&T. The industrial park is the first in the Black Belt to receive the distinction and one of the first ten in the state.

“We want to make sure that the officials and those that are doing the work in the economic development field have the tools whenever they talk to potential companies who are looking to come to this area and that they have an easy way to let them know that the high speed infrastructure is available to them if they come to the South Dallas Industrial Park,” McCallum said. 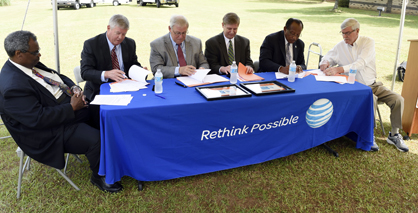 “We can now say to a potential prospect, we have the gold standard in fiber optics,” Vardaman said. “All you have to do is move in and they will help get it to your plant, sharing the cost and you will have all the high speed internet you need.”

AT&T’s fiber network provides the bandwidth needed to support video, cloud services and more through the company’s many different products. AT&T has made several AT&T fiber announcements this year, but they had all been in larger metropolitan areas such as Huntsville, Birmingham and Montgomery.

“It speaks to AT&T’s commitment and the various partners involved that the rural areas are just as important as the urban areas,” Fondren said.

AT&T announced in January that it had added one million new business customer locations to its fiber network since 2012. Nearly 17,000 of those customers were in Alabama. On Monday, Selma became the network’s newest addition.

“It’s another piece of a large puzzle,” said Selma Mayor George Evans. “As we work together to try to find ways to encourage and bring about more jobs in our city and to bring businesses here that need this connectivity to make their business solid and successful.”