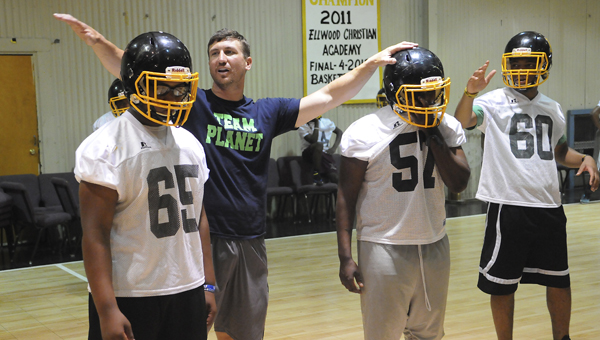 Ellwood Christian head coach Trey Pike instructs his offensive lineman during a spring football practice in the Ellwood gymnasium Tuesday. The Eagles had to practice indoors because the field was still flooded from Monday’s storms. — Justin Fedich

The Ellwood Christian football team huddled up in the corner of the school’s gymnasium, and right before the team ended practice, freshman Michael Jackson raised his voice.

When Jackson reached three, the whole team repeated the two words that will serve as a theme for the spring and summer as Ellwood tries to rebuild toward next season.

The Ellwood Christian Eagles opened their second week of spring practice Tuesday indoors because the practice field wasn’t in good enough condition to use. Ellwood head coach Trey Pike said holding practice in the school’s gymnasium was not ideal, but neither is starting a new season with almost an entirely new team.

“It’s going a little different,” Pike said. “A lot of new people who haven’t played. We’ve only got about three or four that played last year.”

Pike said no player has emerged as the leader yet, and he wouldn’t name a definite starter at any position. He said every one of his players has to earn his spot on the field.

“That’s the way I look at it is every season there’s 11 new positions,” Pike said. “It’s whoever wants to come out and take control and run with the team or run with that spot and go with it.”

Although the team currently has 19 players, Pike said he doesn’t necessarily view the small roster size as a disadvantage, especially in the spring, because it provides him the opportunity to give more individual instruction.

“Numbers look good, but a lot of times you’re only playing 17, 18, 19 guys anyway so why not roll with the guys that are playing,” Pike said.

The Eagles will practice a couple more times this week, two more times next week and then play their spring game Thursday, May 12 at Holy Spirit in Tuscaloosa.

Pike said it will be a good early test for his team because Holy Spirit is a smaller school too.

“It’s almost like starting all back over again, but I think if they just come in and work and do the things we ask them to do, they’ll have a chance to be successful,” Pike said.