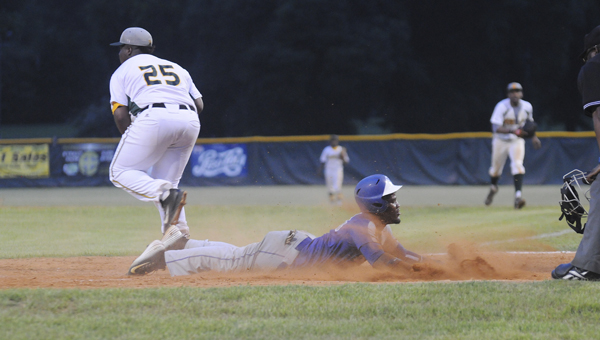 The Concordia College Alabama Hornets didn’t make it easy for the Selma University Bulldogs, but Selma responded to every one of Concordia’s offensive outbursts to escape with a win.

Selma (25-10) defeated Concordia (9-28) 16-9 Friday at Bloch Park in the first of a three-game series between the two schools this weekend. The Bulldogs turned a 6-5 lead into a 10-5 lead in the top of the sixth inning to give them enough of a cushion to come away with the victory in a nine-inning game.

“We capitalized on some key errors they made,” said Selma University head coach Adrian Holloway. “We were able to break it open.”

Selma opened up a 3-0 lead in the top of the first inning. Concordia came back quickly, but not before Selma added a fourth run in the top of the second inning. Arniel Rivera hit a double to right field to bring home Tremayne Hopps to give the Bulldogs a 4-0 advantage.

Concordia tied the game 4-4 in the second inning, After a bases loaded walk gave the Hornets their first lead of the game, Kieundre Simuel hit a long fly ball down the right field line to drive home two runners. A wild pitch from Selma pitcher Garrett Price tied the game 4-4.

In the top of the third inning, Concordia pitcher Derrick Johnson allowed a bases loaded walk to Selma’s Ricky Butts to give the Bulldogs a 5-4 lead. A Rivera groundout ended the inning, but the Hornets were unable to capitalize in the bottom of the third inning. Concordia hit into a double play and then had a flyout to quickly sent the game to the fourth inning.

Devon Pedro added a run in the top of the fourth inning off a Concordia error to give Selma a 6-4 lead.

In the top of the fourth inning, the Bulldogs added to their lead when Devon Pedro scored on a Hornets’ error.

Gary Loftin tried to eat into the Selma lead with a triple to open the bottom of the fourth inning, but Concordia couldn’t send him home, keeping the score at 6-4.

“We’re still growing. I’m proud of my guys,” said Concordia coach Curtis Wimberly. “They fought today, but we made a lot of errors. Senseless errors.”

After a scoreless fifth inning, Concordia cut the Selma lead in half in the sixth inning. De’Shaun Wess crossed home plate off a bunt from Mason Miller to reduce the Bulldogs lead to 6-5.

In the top of the seventh inning, Concordia’s Darius Ford came into relieve Johnson at the mound with runners on second and third. The change didn’t produce better results, however, as Concordia allowed four runs in the inning. Butts slid into home and Rivera hit an RBI single. One more run scored off a Concordia error to give Selma a 10-5 lead.

In the bottom of the seventh inning, Concordia’s Ja’Davin Keith took a pitch to the back to load the bases, as Selma relief pitcher Carmen Monroy faced the tying run at the plate. With a full count, Monroy struck out Carl Fleeting Jr. looking.

A high pitch on the next batter brought Johnson home, but Concordia got greedy when Nyles Freeman was tagged out by Monroy trying to make it to home plate. At the end of the seventh inning, Selma led 10-7.

In the top of the eighth inning, Maxwell Thurmond provided relief at the mound for Concordia, but it didn’t end well. Selma added four more runs to double Concordia’s score, making it 14-7. Concordia was unable to recover.

The teams play a doubleheader at Selma beginning at 1 p.m. Since Concordia didn’t make the playoffs this year, it will be the Hornets’ final two games of the season.

“We’re hoping for a strong finish tomorrow and hopefully we’ll be able to build on that,” Wimberly said.

For Selma, the doubleheader will be a chance to get better for its playoff game on May 11 in Spring Garden, Georgia. Holloway was proud of how his team played down the stretch Friday night.