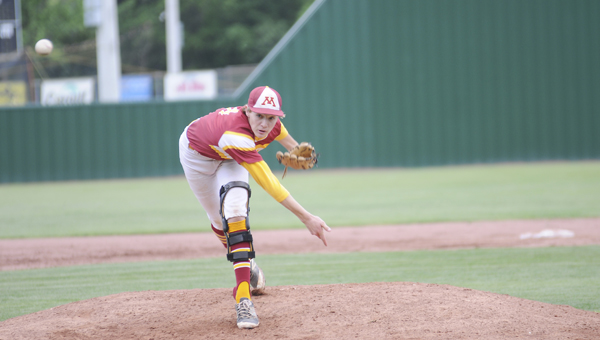 Morgan’s Gunnar Henderson throws a pitch in a game against Fort Dale Academy. Henderson pitched all seven innings in a 6-5 win over Glenwood Thursday.

After an 11-1 loss in the first game of a playoff doubleheader against the Glenwood Gators, Morgan Academy Senators head baseball coach Jeremy Carter approached his seniors and asked them a question.

“Do you want this to be your last game, or do you want to play some more,” Carter said.

His team responded, downing the Alabama State Independent School Association’s No. 1 team 6-5 in the second game of a doubleheader to force a third game in the second round of the AISA playoffs. Both games were played at Glenwood, and the deciding game will be played Friday at Glenwood at 2 p.m.

“The first game, we just didn’t hit the ball well and too many errors,” Carter said. “We pitched four pitchers and couldn’t get anything going.”

Only three innings had elapsed in the first game, and Morgan already trailed 9-1, with freshman Brayton Brown accounting for the Senators’ lone run.

The Gators added a run each in the fifth and sixth inning to end the game in six innings.

Following a 10-run loss, Morgan came out with plenty of energy in the second game.

Miller Spivey and Jackson Henderson each singled in the first inning to give Morgan a 2-1 lead. Meanwhile, freshman Gunnar Henderson pitched all seven innings to give the Senators enough

“He’s going to be a great player,” Carter said of Gunnar. “He just stays composed. He doesn’t beat himself up too much. He just tries to get things done the right way.”

Glenwood scored two runs in the seventh inning, but it wasn’t enough to send Morgan home a day early.

“I’m proud of all of them,” Carter said. “They didn’t give up. They never quit.”

As good as a win against the AISA No. 1 felt, Carter reminded his players after the game their work isn’t over.

“I told them this was a great win, but we’ve got another one tomorrow, so we’ve got to take this momentum and finish what we started tomorrow,” Carter said.