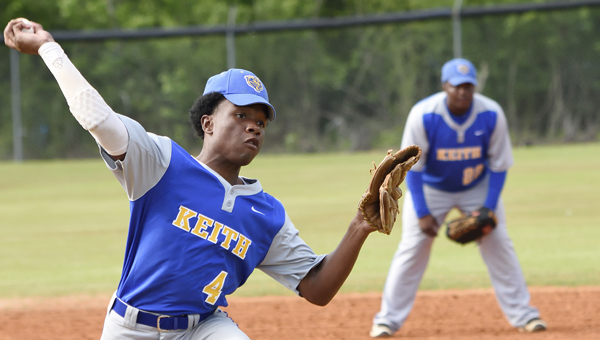 Keith pitcher Brian Crum throws a pitch as Jim Pettway stands in the background. Crum threw a complete game and had a big day at the plate with a single, double and triple. –Daniel Evans

The Bears (1-6) had a baseball program this year for the first time since 1991, when now head coach Anthony Lumpkin was still in high school. After Tuesday’s come from behind win at Selma University, he got emotional.

“To be able to come back and get a win in our first year, it means a lot to me,” Lumpkin said.

It meant a lot to Crum and Pettway too, seniors who only had one season to play baseball in a Bears’ uniform. Crum threw his first complete game of the season, going six innings and retiring the side in the sixth and final inning to put the game away.

He also had an incredible day at the plate. He hit an inside the park home run — aided by a Ellwood error and unofficially ruled a double — and also had a single and triple. He scored three runs and had a RBI.

Crum, who has battled through an injury to his throwing shoulder during his career, said he was proud to be a part of such a big moment in school history.

“Baseball was actually the first sport I ever played so I’m glad I got to play before I leave high school,” Crum said.

Pettway, who will attend South Alabama to play basketball, showed again Tuesday that he’s got what it takes to star on the baseball diamond too. He hit a single and  triple, scored three times and had a RBI.

He caught the game’s second to final out when Crum forced Adarricus Tate, who hit an inside the park home run earlier in the game, to pop out. Crum caught the final out after Jeremy Perkins hit the ball right back to the pitcher’s mound.

“We’ve had a losing streak since it started and some people have been doubting us. It feels good to get a win and to let them know we can play baseball,” Pettway said.

The teams went back and forth most of the way. The Eagles jumped out to a 2-0 lead after Jaylen Colvin and Rayshawn Simmons scored in the top of the first inning.

After Crum got on base, Pettway hit a triple and was thrown out at home trying to stretch it into an inside the park home run.

Jim Pettway followed John’s triple with a triple of his own, but the Bears couldn’t keep the momentum going. Jahiem Dansby and LaDarius Pasley each struck out to end the ending.

Keith tied it when JaQuan Lipscomb scored in the bottom of the second inning.

Ellwood Christian took a brief 5-2 lead in the third.

Keith answered in the bottom of the third with five runs. Crum crushed a ball to center field and scored on the same play after the Eagles had trouble fielding the ball. Denzel Benjamin walked to scored John and Dansby reached home on a passed ball. Nigel Pettway singled to score Benjamin and LaDarius Pasley to give Keith a 7-5 lead.

Ellwood inched within one on a balk by Crum. Tate followed with an inside the park home run to tie the score at 7-7. Keith took the lead for good in the fourth inning. Crum hit a triple to score Jim. John followed with a RBI single to give the Bears a 9-7 lead. John scored on an error and the Bears led 10-7.

Ellwood pulled within two in the fifth when Colvin and Simmons scored, but couldn’t get any closer. After scoring 19 runs in five innings, neither team scored in the game’s final inning.

The Rev. Gary Crum, the headmaster and baseball coach at Ellwood Christian, started his teaching career at Keith 25 years ago. He was at the school the last time the Bears had a baseball team.

“I was there when they played their last baseball game and I hate to be their first win after 25 years but if I’m going to lose to any first time program after two decades, why not let it be a school that is near and dear to me,” Crum said.

Keith will finish its season Wednesday against Wilcox Central on the road, while Ellwood will play at Pleasant Home Thursday in the first round of the Alabama High School Athletic Association playoffs. The series was originally slated to start Friday, but was moved to Thursday.