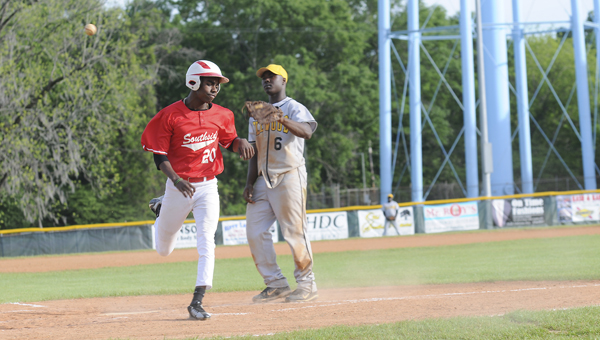 Southside’s Travon Coleman touches home plate after scoring on a wild pitch, while Ellwood pitcher Rayford Mitchell catches a ball from the catcher. Coleman’s run was part of a nine-run third inning for the Panthers, who beat the Eagles 15-5 Monday at Bloch Park. — Justin Fedich

Every player on the Southside Panthers roster scored on Monday, in the third inning alone. The Ellwood Christian Eagles had little chance of coming back after the inning was over.

Southside defeated Ellwood 15-5 Monday at Bloch Park in the Panthers’ final home game of the season, to finish the year on a high note with one game remaining on their schedule. Just a week ago, Southside head coach John Solomon was trying to raise money to allow Southside to finish its season.

Solomon said he didn’t raise as much money as he had hoped, but the money was enough to keep playing the rest of the season.

He gathered his team one morning to inform them of the good news.

“I told them we’re going to make it through the season, so I’m going to do everything I can to help out,” Solomon said.

While Arrington had been given a gift to trot home in the bottom of the first inning, Southside returned the favor to Ellwood’s Anietie Asubop III in the top of the second inning.

After an Ellwood batter struck out, the Southside players started to walk off the field, thinking there were three outs. In fact, there were only two outs, and Asubop got a free pass from second base to third base.

A wild pitch sent Asubop home to put the Eagles on the board.

Ellwood tied the game up in the top of the third inning. Rayford Mitchell took a chance stealing home and slid in safely and Jaylen Colvin also reached home, knotting the score at 3-3.

In the bottom of the third inning, however, Ellwood ran out of gas.

G’Neil Johnson and Ronnie Caver were the first Panthers to reach home in the inning, and Ke’Andrae Rutledge added another run when he scored from third base as the result of an off-target pitch.

Mitchell came onto the mound mid-inning in relief, but it didn’t help, at least in the short term. DeQuan Johnson hit an RBI double that sent three Panthers home.

Southside scored two more runs before Ellwood got its third out, and the Eagles suddenly trailed 12-3.

“You can’t keep a team like Southside on the field as long as we allowed in the third inning,” said Ellwood head coach Gary Crum. “You just can’t do it.”

After a scoreless fourth inning, Mitchelll stole home once again and Colvin scored on a pair of Southside errors to make it 12-5. In the bottom of the fifth inning, Southside added three more runs to win by a 10-run mercy rule.

Solomon said winning in such convincing fashion gives his players plenty of confidence moving forward. He said there was plenty of excitement when he told his players they would get to finish out the season, and he thinks that excitement carried over into the game against Ellwood.

“I guess that’s why they came out here and played so hard today. They gave it all they had,” Solomon said.