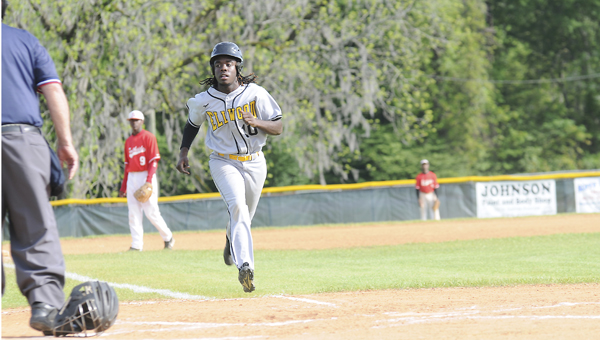 Ellwood Christian’s Anietie Asubop III trots home during a game against Southside Monday at Bloch Park. The Eagles will face Pleasant Home on the road Friday at 3 p.m. in a first-round playoff doubleheader. — Justin Fedich

Both Dallas County High School and Ellwood Christian Academy enter into the Alabama High School Athletic Association playoffs this week with plenty of excitement, but also with questions that still need to be answered.

Dallas County has been preparing the past couple weeks to play a playoff game without nine upperclassmen players, who recently left the team for what Dallas County head coach Cody Massey said Monday were “off-the-field issues.”

“Ultimately, your main goal going into anything is to win, but we know the cards are stacked against us a little bit,” Massey said.

Massey said from what he’s seen on film, Marbury isn’t a team that makes many mistakes and often forces the other team to make a play. While he’s hoping his team makes enough plays to advance to the next round, Massey is looking forward to the challenge of playing a team that will be in Dallas County’s area starting next season.

“This will be a good measuring stick for next year to see what we have and what we need to work on in the offseason to get where we need to be,” Massey said.

After a 15-5 drubbing against Southside Monday, Ellwood head coach Gary Crum is confident his team will recover to play well Friday. The Eagles have one more tune-up game Tuesday against Keith before beginning their first postseason push.

“Staying focused and looking like a playoff team is supposed to look. That’s all we’ve got to do,” Crum said.

Although Crum is expecting his team to be competitive against Pleasant Home Friday, he said he’s proud of his team for even making it to this point. Crum is glad that the baseball team followed in the successful year for Ellwood.

“Football has made it. Basketball made a run for it a little this year and to have baseball there for a young school such as ours is phenomenal,” Crum said.