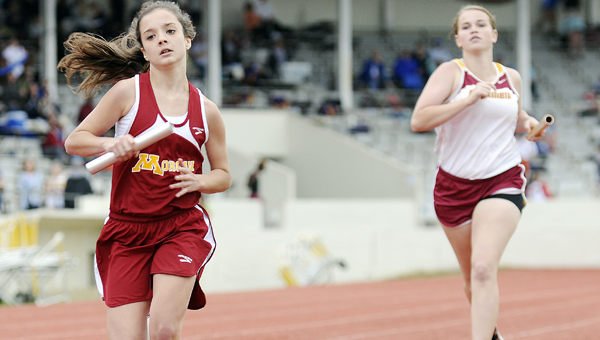 It took 29 years for the Alabama Independent School Association 100-meter boys record to be broken. It took one day for it to be broken again.

Only a day after Escambia Academy junior Kris Brown broke the long-standing 100-meter record with a 10.76, Brown ran a 10.72 to break his own record in the AISA state track finals Thursday at Memorial Stadium.

Escambia’s boys’ team won the AISA state track meet with 192.5 points and Tuscaloosa Academy’s girls team won with 125 points Thursday. The Morgan Academy girls placed sixth out of 14 teams with 35 points, and the Morgan boys finished tied for eighth place out of 16 teams with 22 points.

Tuscaloosa head coach Ethan McBride said some of his girls had the races of their lives Thursday, allowing his team to defeat runner-up Lee-Scott for the title.

“Everybody did their part, and if everybody can do their part, it can slowly work out to the way we needed it to be,” McBride said.

The Escambia boys ran away with the title, scoring 128 more points than runner-up Lee-Scott. Escambia head coach attributes his team’s success at the state meet to the intensity his team brings to practice.

“One thing that helps us is we’ve been competitive amongst ourselves,” Fountain said.

None of the Morgan competitors won events in Thursday’s finals, but some came close. After finishing first overall in the 100-meter dash in qualifying, freshman Peyton Granthum came in second in the finals with a 13.36.

Sophomore Sam Brackin narrowly qualified for the finals in the long jump, but he proved that he was worthy of earning a spot when he finished second by an inch. Morgan senior Stacy Russell placed seventh in that same event.

A couple Senators fell just outside the top three in their events. Tidmore finished fourth in the 800 meters with a 2:47, and eighth grader Caroline Thomas came in fourth in the girls’ discus throw.

AISA athletic director Roddie Beck said he loves having the event in Selma each year because the facility is top-notch and not something that is offered around the state.

He said many teams choose to stay overnight in Selma, and he believes the state track meet will stay in Selma for many years to come.

“We just enjoy coming back each and every year,” Beck said.

The headliner for next year’s state track meet might be the same as this past year. Fountain said he expects Brown to be back in the weight room as soon as he gets back from Escambia.

“Next year’s goal is to break every record that [Escambia] has to offer,” Brown said. “Even my own.”