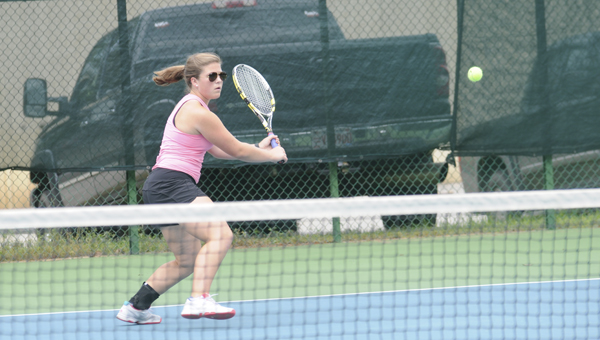 Mary Ashlyn Pearce came the closest to victory for the Morgan girls in the finals, as she kept the score tight the entire way through in a 7-5, 7-6 (7-1) loss to Tuscaloosa Academy’s Madison Elmore in No. 5 singles.

In a regular season match eight days prior, Pearce lost to Elmore 6-3, 6-3. On Tuesday, Pearce was one of only two Senators players on the boys or girls side to bring a set in a finals match to a tiebreaker.

At No. 2 singles, Emily Sherrer lost 6-2, 6-4 to Tuscaloosa’s Natalie Arnold. Stinson said he could see Sherrer improving throughout the course of the match, not giving up despite facing a deficit the majority of the way.

“Morgan always has a strong, competitive team,” said seventh-year Tuscaloosa head coach Clete Browder said. “They have a fighting spirit about them. I can’t ever remember playing Morgan and it wasn’t close.”

Morgan’s Sophie Talton lost her finals match at No. 3 singles to Abby Fleenor 6-4, 6-2, but she was still proud of her effort afterward.

“We had some incredible points, so I think I went out on a good note,” Talton said.

Talton said her proudest moment as a tennis player might have come in the match prior, when she won her semifinal match to advance to the finals.

“In the semifinals, I ended my match with an overhead and usually all my overheads go in the net, so it was a pretty good feeling,” Talton said.

“Tuscaloosa is just a step above,” Stinson said.

Browder attributed his team’s five straight boys and girls titles to having the same group of players who come prepared for every match.

“It’s the players. I definitely have talented players and they have a really good work ethic,” Browder said. “They prepare and they love competing and they love the challenge.

“When you have that mixture, good things happen.”