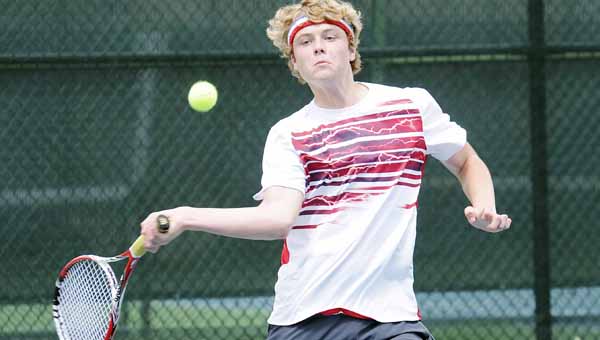 Morgan Academy’s Mason Perkins hits a forehand during his No. 3 singles match against Tuscaloosa Academy’s Grant McAllister during the Alabama Independent School Association’s state finals Tuesday at Lagoon Park in Montgomery. Perkins bounced back from losing 6-1 in the first set to force a tiebreaker in his second set. — Justin Fedich

The Morgan Academy Senators lost every match of the Alabama Independent School Association tennis finals against Tuscaloosa Academy Tuesday at Lagoon Park in Montgomery. But that doesn’t begin to tell the entire story.

Eight days after getting blown out by the Tuscaloosa Knights, the Morgan boys gave the Knights a much tougher battle in the AISA state championship. In the regular season match last week, no Morgan boys’ tennis player won more than four games in a set. On Tuesday, the Senators forced a tiebreaker in one match and a third set in another.

Morgan head coach Baxter Stinson knew it would be a challenge coming into the match to beat Tuscaloosa, who has won the last five boys and girls AISA titles. Still, Stinson said he noticed a difference in his players this time around.

“They just came out here with more of a competitive attitude than they have in a regular season match,” Stinson said.

Morgan senior Kareem Hammad was the lone Senator to take his opponent to three sets Tuesday. Hammad, who faced off against Blake Wright in No. 5 singles, won the first set 6-4, but lost the next two 6-4, 6-3.

“Last time I played him, he swept me in the first set, so definitely a lot better this time,” Hammad said.

Stinson said he was disappointed Hammad wasn’t able to pull out the win in the third set, but he said he’s proud of how far he has come as a tennis player.

“It feels pretty good to at least get that far,” Hammad said. “I thought I had him beat at one point, but he’s a good player and it was a good match, so I can’t really stay upset about that.”

Willis Watt Jones, one of Morgan’s No. 1 doubles players, also wasn’t going to hang his head after Tuesday’s loss. Jones, a senior, got to play his final match in a Senators uniform alongside his brother George Jones.

George and Willis Watt were swept 6-0, 6-0 in the regular season by Tuscaloosa’s Mason Lake and Grant McAllister. In the state championship match, the Jones brothers got a game on the Knights’ duo, falling 6-0, 6-1.

“I felt like we were able to put everything out there, and we had a good time too,” Willis Watt said.

Mason Perkins lost his first set to McAllister at No. 3 singles, but he was far from done. In the second set, Perkins hit overhead winners to lead 3-2 and again to lead 5-4. Perkins smashed a down-the-line winner to take a 6-5 lead in the second set, but McAllister tied the set to send it to a tiebreaker. There, Perkins fell 7-1.

Will Brackin lost his finals match at No. 4 singles against Tuscaloosa’s Trevor Benoit 6-3, 6-2, but both Brackin and Perkins bounced back in their No. 2 doubles match.

Brackin and Perkins trailed by one game most of the first set against Mercurio and Benoit, before losing the set 6-4.

“I watched Will Brackin get better in the last 20 minutes of that doubles match,” Stinson said.

Ultimately, Brackin and Perkins lost the second set 6-3. After the No. 2 doubles match — Morgan’s final match of the season — both players were visibly exhausted and emotional. The Morgan Senators knew it would be tough to beat a team that had beaten them the past four years in the AISA state title match.

Despite getting swept by Tuscaloosa just over a week ago, none of the Morgan players let themselves believe they weren’t as good as their opponent when they stepped on the court.

“They’ve always been a real good rivalry,” said Tuscaloosa head coach Clete Browder. “They’re well-coached, and they always have good athletes and they’re competitors, so we have a lot of respect for them every time we play them.”