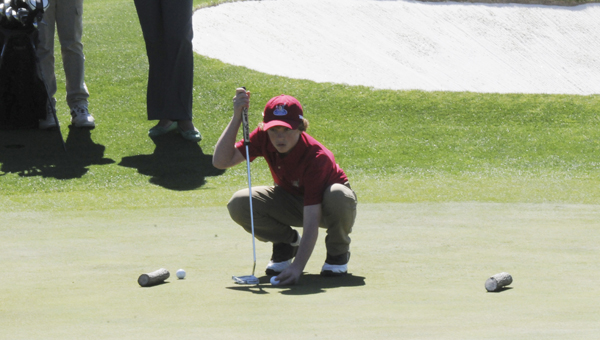 Jones Free, a native of Selma and a student at Morgan Academy, lines up a putt on the 18th green of Augusta National Golf Club at the annual Drive, Chip and Putt competition Sunday. — Dennis Palmer

AUGUSTA, Ga. — Sometimes the luck of the draw falls in a golfer’s favor, and sometimes it doesn’t. While he said afterward the draw didn’t faze him, 13-year-old Jones Free was chosen through a random drawing to go first in the driving portion of the Drive, Chip and Putt Championship at Augusta National Golf Club.

With a howling, cold wind in his face, Free said he had a plan for the two chances each player was allowed, but it didn’t go as he’d envisioned.

With both drives going out of bounds, the cards were stacked against Free, who wound up with an aggregate of 13”3’ on his two chips and 12”3’ on his two putts. Free wound up finishing eighth in the country in the boys 12-13-year old age division.

Jones’ age group was won by Manteca, California’s Ty Griggs, who drained a 15-foot putt to pull out a close victory over Skylar Fox, who also made his final putt to put the pressure on Griggs.

All in all, Free said the entire process of making it to Augusta, and getting the opportunity of a lifetime to putt on Augusta’s famed 18th green, was something he’ll never forget.

“I was just pretty excited to make it here,” Free said.

His father, William, caddied for him at each of the qualifying events leading up to the championship, and said the experience was one he’ll remember forever.

“It was awesome just to be able to watch him on the 18th green,” William said. “It’s both of our first times here, so it was a sight to see, that’s for sure. It’s better than I anticipated and just a joy to experience with him.”

The night before the competition, Jones and his family — including his sister Sarah Lloyd and his grandparents — were treated to a banquet and got to meet Augusta National Golf Club Chairman Billy Payne and several other celebrities. Among those he met were former PGA player Peter Jacobson and former U.S. Secretary of State Condoleezza Rice. Jacobson, who helped commentate the Drive Chip, and Putt Championship on the Golf Channel, mentioned Jones, saying he had a great name for a future PGA player. Jones said the person he enjoyed meeting the most, though, was Michael Breed, who hosts the Golf Channel show, “The Golf Fix.”

Jones said he will likely try his hand at competing again next year, seeing if he can make it back to Augusta to compete in the 14-15-year old division, something his mom, Callen Free, said doesn’t surprise her. She said through it all, it was Jones’ focus that impressed her the most.

“His determination and his practicing, and that he just stayed humble through it all,” Callen said. “And his drive to be the best.”