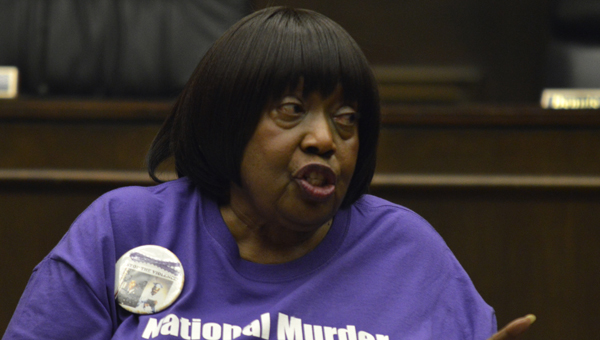 Every day for nearly 20 years, Barbara Brown has worn a button with photos of her two sons centered underneath a purple ribbon. Her sons, 18-year-old Brandon and 28-year-old Horace Jr., were murdered within 14 months of each other.

The murders were random, unrelated acts of violence, according to Brown.

However, it wasn’t until another murder shortly after the second murder of her oldest son that triggered Brown to take action.

In response to continuous violence in Selma, she founded the Citizens Against Violence group. Brown described the groups as a social service organization.

On Monday, the group held a meeting at City Hall in recognition of National Murder Awareness Day.

Brown said the meeting is a time for victims’ families, the public, and local officials to come together to talk and share ideas on how issues may be resolved.

“These are trying times in Selma,” Brock said to the audience. “Every one of my investigators is working a murder case.”

Since the beginning of March, there have been five murders in Selma. So far, only one case has made an arrest.

On Saturday, March 7, 29-year-old T.J. Shelton and 27-Year-Old A.J. Lee were killed near the intersection of Marie Foster Street and Selma Avenue. Investigators believe the shooting was a targeted incident.

Two weeks later, Sandy Rhodes allegedly shot and killed his brother-in-law, 35-year-old Christopher McNeil during a domestic dispute. Rhodes has been arrested and charged with murder.

On Tuesday, March 30, Selma High School student Cedric Williams, 18, was shot and killed on the 2500 block of Etheridge Avenue shortly after 1:30 a.m.

Brock said witnesses have been present in a majority of these incidents, but haven’t come forward with information.

“We cannot do this by ourselves,” Brock said. “We can only do so much at the police department. I need the citizens of Selma and Dallas County on board and help us solve these crimes.”

Sanders believes in order to prevent these acts of crime, the mentality and culture within Selma needs to change.

“When you develop a culture, then people feed into that culture and react on a basis of that culture. We are a culture of violence here in Selma,” Sanders said.

Brown thanks Joyce Whitley, Barbra Hicks, Michael Johnson, Patsy B. Reese, Sharon Jackson, Joann Hunter Walker and other members of the group for their support and participation with the group over the years.