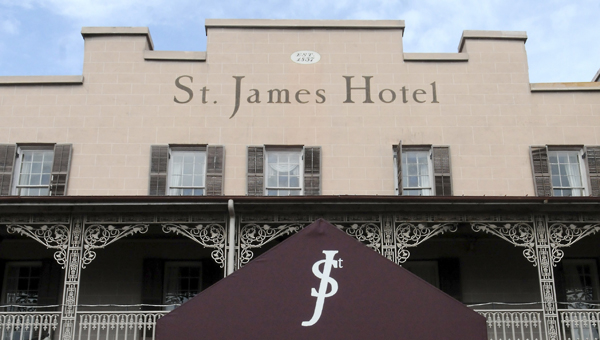 The Selma City Council voted Friday to have an appraisal done on the St. James Hotel. –File Photo

The Selma City Council voted in favor of having an appraisal done on the St. James Hotel Friday and approved a company out of Chicago to do the job.

Councilwoman Susan Keith motioned for Hotel Appraisers and Advisors, LLC to do the appraisal and it passed unanimously after some discussion among the council. Keith said she originally narrowed the search to three companies, but Hotel Appraisers and Advisors, LLC was the only one she had heard back from. She was also impressed with the company’s previous work, which she said has included appraisals on several flagship hotels.

The president of Hotel Appraisers and Advisors, LLC is Hans Detlefsen. Keith said she had been corresponding with Detlefsen over the last few days.

According to the company’s website, Detlefsen has been a hotel appraiser, real estate consultant and public policy advisor for nearly two decades. Some of his clients have included hotel corporations, banks, management companies, tourism agencies and state and local governments.

“We could get him on the phone right now if y’all want to,” Keith said.

Keith said the company estimated the appraisal cost to be between $12,000 and $15,000. The council allocated $15,000 to be used for the appraisal with the funds coming from the city’s red light traffic fund.

Keith said the appraisal process may be able to get started as early as next week.

There was some discussion among the council on whether Peterson should be allowed input on who does the appraisal. In the end, they decided it was best to go ahead and move forward.

“This guy is not from here so it’s not like he is doing us a favor,” said councilman Michael Johnson of the appraisal company.

“I think now getting the appraisal will really get the ball really rolling,” Keith said.

In his latest proposal discussed at Tuesday’s meeting, Peterson had agreed to pay for an appraisal through a third party. If the hotel appraises for more or less than the $1.2 million the city is asking for the hotel, the two sides would renegotiate.

Keith said if he wanted, Peterson could always get his own appraisal done as well.

The council also briefly discussed whether or not to pay Peterson for managing the hotel. Peterson has volunteered to manage the hotel since Dec. 1 at no cost to the city.

In a letter of intent Peterson wrote to the council, Peterson asked the city to pay him management fees until the sale closes at the same rate as those paid to Strand Management, which previously operated the hotel. Strand made around $4,800 in management and accounting fees.

“Mark is working circles around whatever they did. He can’t keep going like that for free,” Keith said.

Williamson disagreed, noting the estimated nearly $150,000 that has been spent on operating costs for the hotel since October.

Further discussion was tabled until the council’s next meeting.