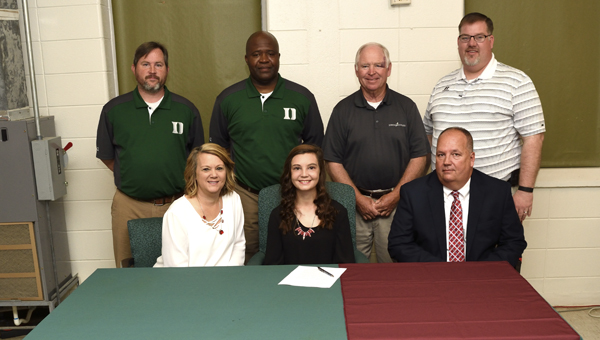 Dallas County senior Tori Hatfield has pitched all but one game this year for the Hornets. She’s won 13 of her 14 starts and helped the team get off to a 14-1 record to begin the year.

All of her hard work on the softball field has paid off. Hatfield signed with Judson College Thursday and will play softball for the school next year.

“I’m really excited to continue to play throughout college,” Hatfield said. “I’m real excited to be a part of their team.”

Hatfield has had a tremendous career for the Hornets. Head softball coach Willie Moore said with a career record of 54-16, Hatfield sits behind only Cassie Jones for most wins in school history.

“How she goes is how we go,” Moore said.

This year she’s one of the older players on an inexperienced Hornets’ team. Moore said her leadership has really shown. He said no matter what the situation is, Hatfield’s demeanor never changes and it keeps the other players under control too.

“She’s always cool and calm, no matter what the situation is,” Moore said. “You don’t know if she’s happy or sad. I think with this team being really young, that has been a strength because there’s not a lot of ebb and flow with her.”

Judson College head coach Lee Jones said the team had Hatfield in for a tryout last year and has been recruiting her since then.

“When she tried out, she threw a lot of strikes and kept the ball down and she just keeps better and better,” Jones said.

He said he also likes that Hatfield is a left-hander.

“Pitching is the key to winning and you’ve got to throw strikes,” Jones said. “Tori is going to help us a lot.”

Hatfield has worked with pitching coach Peewee Newman, who has helped her work on accuracy and learn different pitches. She said her go-to pitch right now would be her curveball.

She is the daughter of John and Sheila Hatfield, who won’t have to travel far to see Tori play in college. Dallas County High is less than an hour from Judson College.

“I’m glad I can stay close to my family,” Tori said. “That’s one thing I was trying to do, was stay not too far away.”