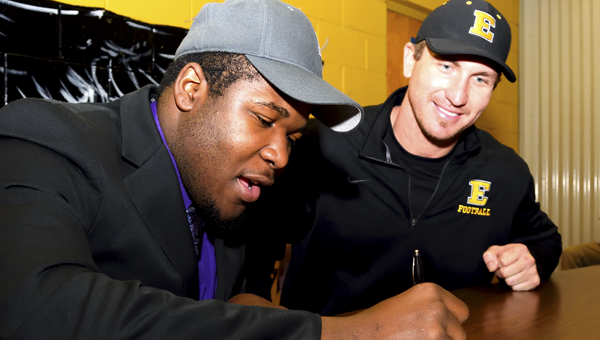 Ellwood Christian senior Rayshawn Simmons signs a letter of intent to play football at Kansas Wesleyan Thursday as head football coach Trey Pike looks on behind him. Simmons was a standout linebacker for the Eagles this past season. — Daniel Evans

Ellwood Christian Academy senior Rayshawn Simmons made school history Thursday by signing a football scholarship with Kansas Wesleyan University. Simmons is the first Ellwood player ever to sign with an out-of-state school.

“Ever since I was young, I’ve been dreaming of this day right here,” Simmons said. “I’m just glad it actually came true.”

The signing is the result of a trip Simmons, teammate Anietie Asubop II and Eagles’ head coach Trey Pike took to Kansas recently. The trio made a trip to Sterling College, who offered Asubop and Simmons, and also stopped by Fort Scott Community College, where Pike has previously served as an assistant coach.

Before they left, Kansas Wesleyan called and asked the players to stop by. Simmons said he felt like the school was the right fit for him.

“When I play football, I like to be on a team where it’s like family,” Simmons said.

The trip took four days in all, but both players received offers to both Sterling and Kansas Wesleyan. Asubop was set to sign Thursday as well, but elected not to as he tries to make a final decision.

Pike said the trip was a rewarding experience for all. He got to spend some more time with two of his seniors before they go off to school, and they got a chance to see life outside of the deep south.

“It was a very good experience for those guys going to the Midwest,” Pike said. “It is completely different than anything in Selma, Alabama, and it gives them the opportunity to see something they may not have seen if not for college.”

Simmons actually started his career at Dallas County High School before transferring to Maplesville as a sophomore. This past season he was a standout linebacker for Ellwood Christian.

As he signed the needed paperwork to make it official, Simmons was surrounded by Ellwood Christian football coaches and administrators, but he said his mother, who passed away when he was 11, was on his mind.

“I just wish my mom was here to see it,” Simmons said.

Pike said Simmons is a hard worker who has worked hard to excel in the classroom and on the field. He said he hopes younger students at the school notice the hard work Simmons put in and showed them that it’s possible for them too.

“He had the drive to do what he needed to do to get where he needed to be,” Pike said. “He’s one of those kids that worked as hard as he absolutely could and set himself up to be successful.”