Selma manages only one hit in lopsided loss to Chilton 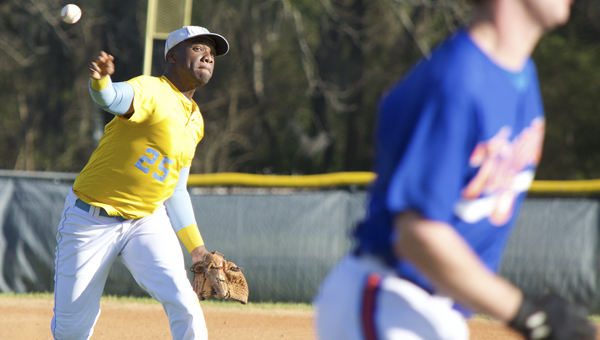 Selma’s Kiwansis Jones throws out a base runner for Chilton County during Selma’s 11-0 loss to the Tigers at Bloch Park. The Saints had only one hit in the game. — Daniel Evans

Selma baseball coach Burrell Bonner told his players to keep their heads up following Tuesday’s 11-0 loss to Chilton County at Bloch Park that opened area play for the Saints.

Selma committed seven errors in the loss, but the Saints were in the game until Chilton erupted for seven runs over the last three innings.

“If you take away the seven errors, the game would’ve been going into extra innings at 0-0,” Bonner said.

“I told them that you’ve got to continue to fight. As they got a little lead on us, we dropped our head and tucked our tail.”

Not a lot went right for the Saints in Tuesday’s loss.

Selma had only one hit in the game — a single by Desmond Williams in the second inning. That was the only runner Chilton’s Tolliver Gilliland allowed on base the entire game.

“We do batting practice every day and our kids just aren’t seeing the ball,” Bonner said. “The main thing is we get our biggest hitters up trying to kill the ball instead of just trying to place the ball and make contact.”

It also didn’t help matters that Chilton had 13 hits, including two triples and two doubles. Bonner was most concerned with Selma’s play in the field, which he knows has to improve for the Saints to compete at a high level.

The errors started for the Saints in the first inning when Chilton’s Dustin Clekler hit the ball into shallow center field, where it was dropped. Corbin Rice scored from second base, giving the Tigers a 1-0 lead. Selma pitcher Ron Sanders, who threw all seven innings, managed to get out of the jam without allowing any more damage.

Chilton tacked on another run in the second inning after back-to-back doubles by Austin Hatch and Giquon Lane to go up 2-0. Neither team scored again until the fifth inning, when Chilton finally started to pull away.

Hunter Bennett singled to score Lane, but the Tigers were just getting started. Cleckler doubled to score Bice and Bennett to make it 5-0.

A RBI single by Keaton Sullivan added one more run to put Chilton ahead by six.

A triple by Sullivan in the seventh scored Dustin Langston and Cleckler. Chilton added three additional runs on a passed ball, a triple by Lane and a single by Hatch.

The teams will play a rematch on Wednesday at Chilton County.