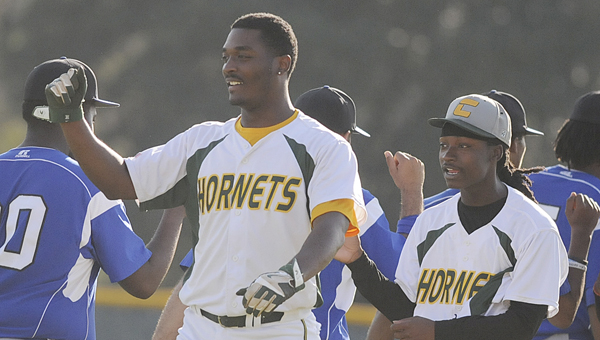 Concordia College Alabama’s Kieran Sturdivant shakes hands with players from Rust College following the Hornets 5-4 victory Tuesday at Bloch Park. Sturdivant had a walk-off hit in the seventh inning to win the game for Concordia.–Daniel Evans

Kieran Sturdivant hit a walk-off single in the bottom of the seventh inning to lead Concordia College Alabama past Rust College 5-4.

Sturdivant wasn’t even supposed to play Tuesday. He served as the Hornets’ first base coach for Concordia’s opening 9-3 win and did the same for six innings of the second game too.

With the second contest tied in the last inning, he told Hornets’ coach Curtis Wimberly he could bat if needed.

“I told him ‘I’m ready to go’ and he told me to get loose,” Sturdivant said. “I already knew what I had to do when I got up to bat so it was just me finding a pitch. I was looking for that perfect pitch.”

That decision paid off.  Sturdivant ripped a ball toward second base that ricocheted into the outfield, allowing Christian Briscoe to score from second base.

“I’m proud of my guys. They showed a little fight today and we came out victorious,” Wimberly said. “To come out with a win with two outs, a win is a win. That’s big for us.”

The Hornets led 4-2 in the sixth inning before Rust got runners on the corners with no outs. The Bearcats knotted the game, but Concordia didn’t lose its poise.

Wimberly said Tuesday’s wins could be the turning point of the season for the Hornets (5-19).

“This could be the springboard for the rest of our season,” Wimberly said. “Plenty of time to turn it around. This will go a long way toward morale too.”

Concordia is out for spring break so will not play again until April 2 against Fisk University.