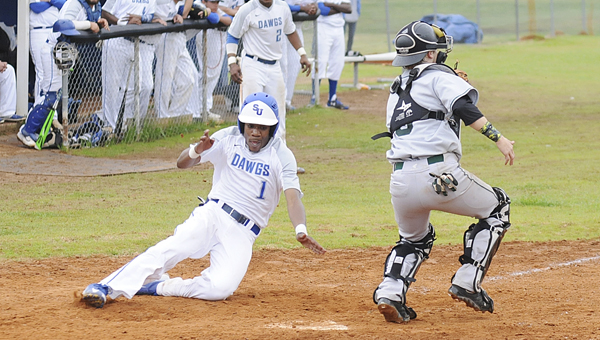 After winning the first game, the Bulldogs dominated a mercy-rule shortened second game 10-0. In game two, the Bulldogs scored four first inning runs after two errors by Concordia (3-19) in the field.

Errors became a recurring problem for the Hornets throughout the game.

Concordia committed four errors in all, which didn’t help against a Selma University (10-4) team that didn’t make any.

Selma’s Ricky Butts, Mahodre West and Blaine Strocener had two RBIs apiece for the Bulldogs in the win. Tremayne Hopps also had a triple and a double, scored a run and had a RBI.

“We didn’t really up to our standard today,” said Selma University Adrian Holloway. “We didn’t hit like we normally do, but we still managed 10 hits. As a coach, you’re never satisfied.”

Garrett Price through two innings of work before getting replaced by Juan Ayala, who threw the game’s final three innings. Price is on a pitch count so he had a short day of work, but he also ran into some trouble in the second inning.

He hit Concordia’s Christian Briscoe and Derrick Johnson in back-to-back at bats but pitched his way out of a jam. With the bases loaded, Price forced Da’Shaun Wess to ground out.

Price and Ayala combined to allow only one hit.

“We have him on a pitch count because he’s been having some trouble with his arm, so we had him on a short leash today,” Holloway said of Price.

Concordia’s Derrick Johnson allowed ten hits in five innings of work, but didn’t get much help from his defense.

Arniel Rivera started the game with a double for the Bulldogs and Devon Pedro followed with a hard hit ball to second base, which was mishandled. He reached base and so did Jose Duran, who followed with a deep hit to left field that was dropped.

Travis Jean grounded out, but scored Rivera to put Selma up 1-0.

Strocener reached on an error by the second basemen, which allowed Pedro and Duran to score.

“It’s stuff we work on, and we’ve got to make the plays,” said Concordia coach Curtis Wimberly.

The scoring continued when Butts singled to bring in Strocener from second base, which put Selma ahead 4-0.

The Bulldogs batted around in the first inning.

In the second inning, Daryl Watkins walked with the bases loaded. Jean scored on the play. In the next inning, Hopps scored on another error, which took place on a hard hit ball by Rivera.

West’s double and Hopps’ single in the fourth tacked on three more runs and Selma led 9-0 after four innings. A single by Butts in the bottom of the fifth scored Duran and ended the game, due to the 10-run mercy rule after five innings.