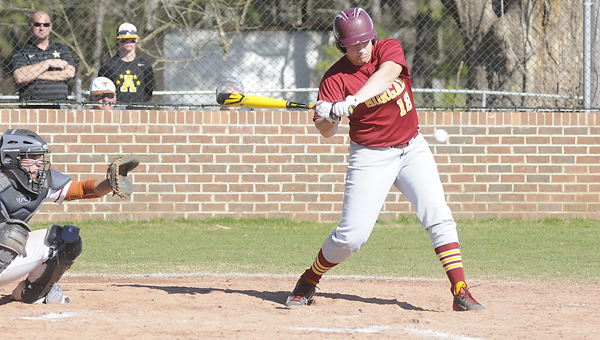 In the final day of the Elton Reece Pepsi Classic, the Morgan Academy Senators won one and lost one.

The Senators (4-4) opened up Saturday’s action with a 6-4 win over the Kingwood Christian Lions in the morning, but couldn’t get any offense going in the afternoon game that ended in a 4-0 loss to the Marengo Academy Longhorns.

“We hit the ball better,” said Morgan head coach Jeremy Carter of the first game. “We didn’t make many mistakes, few errors and we hit in rhythm. In the second game, we didn’t hit and we struck out too many times.”

In the game against Kingwood, Morgan didn’t waste time putting runs on the board. In the second inning, Gunnar Henderson, J.R. Wood and Landon Davis all singled and reached home plate.

Brayton Brown drew two walks — one in the first inning and another in the third inning — and then hit a triple in the fifth inning. Miller Spivey walked in the fourth inning, stole a base and scored a run.

Sawyer Hopkins got the win at the mound against the Lions.

In the game against Marengo, Morgan didn’t get on base until the fourth inning. In the second inning, Bishop Price, Henderson and Hopkins all struck out.

Spivey was the starting pitcher for Morgan. In the top of the third inning, the Senators allowed two runs. Jackson Henderson and Bishop Price each caught deep shots to the outfield to keep the deficit at 2-0 midway through the third inning.

Britton Adams drew a walk in the bottom of the third inning, but a Jackson groundout ended the inning.

Gunnar took the mound in the top of the fourth inning and allowed runners to get on first and third. However, he was able to close out the inning without giving up any runs.

Woodham Kemmer led off the fourth inning with a single, but none of the other Senators were able to get on base. Morgan went into the fifth inning still trailing 2-0.

After a pair of fielding errors, Marengo scored another run to take a 3-0 lead. The next batter cracked a deep shot to right field. Price picked it up and drilled a throw to home plate, but Brown wasn’t able to corral the short hop to stop a runner from scoring.

Trailing 4-0 at the bottom of the fifth inning, Morgan drew two walks. When pinch runner Peyton Egbert got thrown out between first and second base and the rest of the Morgan batters failed to get on base, the Senators went into the final inning behind by four runs.

Gunnar kept the Longhorns scoreless in the sixth inning, but Morgan couldn’t rally with its final opportunity.

Abigail Lane runs to first base for a single in a game Saturday against Marengo. — Justin Fedich The Morgan... read more