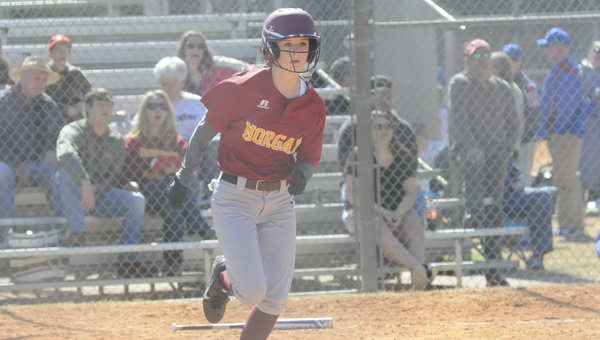 Abigail Lane runs to first base for a single in a game Saturday against Marengo. — Justin Fedich

The Morgan Academy Senators’ softball team entered into the bottom of the third inning Saturday against Tuscaloosa Academy trailing 9-2. The Senators left that same inning leading 10-9.

The Senators (1-7) won their first game of the season off an eight-run rally in the third inning to beat the Tuscaloosa Academy Knights 10-9 Saturday afternoon at the Elton Reece Pepsi Classic at the Sportsplex. In a game Saturday morning, Morgan lost to the Marengo Academy Longhorns 11-7.

Despite a loss in the first game, Morgan head coach Kay Jones could already see the improvement her young team had made from games prior.

“Great game. Great effort on everybody’s part,” Jones said after the 11-7 loss to Marengo. “You can just see with every game, the confidence levels are going higher.”

Although Morgan was successful offensively, Marengo’s offense was too much. But it gave the Senators confidence going into the second game.

Redd scored a run in the first inning of the game against Tuscaloosa, but the Knights built a seven-point lead going into the bottom of the third inning. Each game was limited to an hour and 20 minutes to give every one of the 21 teams in attendance a chance at playing their game at its scheduled time.

While the game had planned to go for five innings, the bottom of the third inning took so long that the time limit had been reached at the inning’s conclusion. For Morgan, that was good news.

Eight Morgan batters drew walks in the bottom of the third inning alone. With the game tied 9-9, Maggie Colley hit a ball into the outfield and brought Ansley Smitherman home for the winning run.

“We’re excited,” Jones said. “Just a great victory. Everybody had a great effort.”

Morgan will try to continue on an upward trajectory when it plays its next game back at home Friday against Southern at 4 p.m.