Without top scorers in lineup, Selma loses to John Carroll 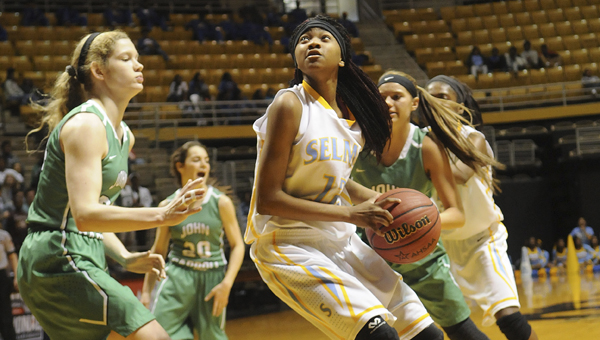 Selma was only down 10 entering the fourth quarter, but with four players suspended from the team and three other Saints fouled out, John Carroll dominated the fourth quarter. The Cavaliers pulled away for a 69-46 win and a matchup with Homewood in the regional championship game.

Selma’s season ended with coaches and players likely wondering what might’ve been.

“We had some kids that thought about themselves,” said Selma coach Anthony Harris. “They didn’t put team first and that’s what happened. Bad choices, bad decisions.”

Four players missed the game for what Harris called a “violation of team rules.” The Saints made the trip to Montgomery Wednesday, including those four players, but before the night ended Harris had called their parents to pick them up.

“I sent them home last night,” Harris said. “Their parents came and got them.”

Even without some of their best players, Selma didn’t go down without fighting.

Kynadra Lewis was forced to be the Saints’ primary ball handler, but excelled in that role Thursday.

She helped Selma break John Carroll’s full court press consistently and in turn that allowed the Saints to stay in the game. Lewis scored six of Selma’s eight points in the first quarter and the Saints led 8-7 after the first quarter.  John Carroll started the second period on an 11-0 run, led by a 3-pointer by Elizabeth Hill and layups by Veronica Richardson and Brandy Lee.

Selma responded with a 3-point play by Hatcher and Lewis beat the second quarter buzzer to pull Selma within 29-19 at the half.

In the third quarter, the Saints closed to within two with a 14-6 run to begin the second half. Na’Quashia Smith made two shots and Lewis went coast to coast for a layup with 2:40 left in the period.

Lewis fouled out on the next John Carroll possession and Hatcher and Moore fouled out shortly after. The Saints played the remainder of the game without six of their rotational players and it led to a lot of mistakes.

Selma had 37 total turnovers in the game.

“They got the most time they’d gotten this whole year in that fourth quarter,” Harris said the lineup he used to finished out the game.

Selma went into the fourth quarter down only 44-34, but the Saints were outscored 25-12 the rest of the way.

Smith led the Saints in scoring and also had five rebounds. Lewis chipped in 10 points and eight rebounds. Ta’Sharri Grimes had four points and 10 rebounds. Kaitlin Gagliano led the way for John Carroll with 16 points. Hill had 11 points and Lee chipped in another 10 for the Cavaliers.