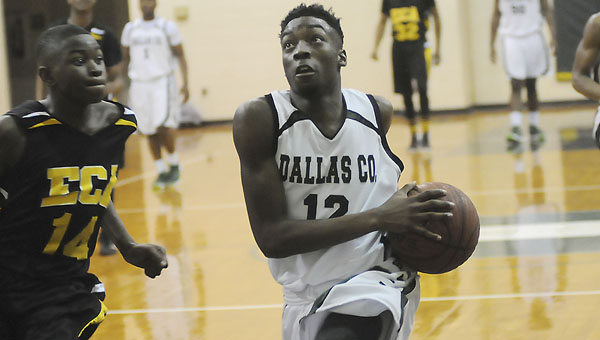 PLANTERSVILLE — The Dallas County girls are winning games at the perfect time of the season.

The Dallas County Hornets (6-18) used a strong fourth quarter to escape the Ellwood Christian Eagles (0-24) 50-44 Friday at Dallas County. Jaliah Blakes led all scorers with 15 points, 14 of which came in the second half.

“It’s always good to close out the season on a win going into the postseason,” said Dallas County head coach Charles Thompson.

“Hopefully, we can take some momentum with us and win these last two games into the postseason.”

Ellwood fell into a 13-8 hole at the end of the first quarter, and needed a strong offensive effort to stay in the game.

“We just didn’t come out in that first quarter and played like we should’ve played,” said Ellwood head coach James Spears.

Brianna Dower responded by scoring six points in the second quarter to cut the Dallas County lead to 19-17 at halftime.

Monique Jones made a 3-pointer as the clock hit zero in the third quarter to cut the Hornets score to 36-33.

The Dallas County senior basketball players tried to hold back tears as they were honored before their game.

The Dallas County Hornets (11-13) ended its season with a dominant performance over the Ellwood Christian Eagles (9-15) 57-33 in both teams’ season finales Friday at Dallas County. From the opening tip, the outcome was never in doubt.

“We got a quick start and it set the tone for the game,” said Dallas County head coach Willie Moore.

Timothy Baker opened up the game with two steals and two layups to put Dallas County ahead 6-0. Midway through the first quarter, Jaydon Buford, who led all scorers with 12 points, knocked down a 3-pointer to give the Hornets a 15-3 lead. Late in the first quarter, Ladarius Furlow muscled his way in for a layup to extend the Dallas County lead to 21-5.

At 1:50 in the second quarter, Buford rattled down a corner three to give the Hornets a 39-13 lead. The score was 43-15 at halftime. Tyre Webster made a 3-pointer with 5:03 left in the third quarter to cut the Dallas County lead to 47-20. Rayford Mitchell blocked two shots to close out the third quarter, but Ellwood still trailed 51-23 at the end of the third quarter.