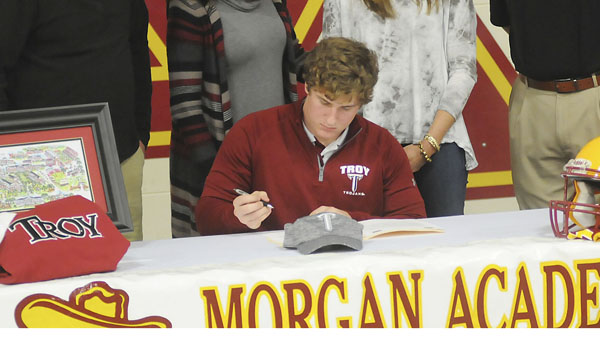 The entire Morgan Academy senior class filled the old gym Wednesday as J.R. Wood put on his Troy University hat and signed the papers to make it official.

Wood was supported by his father, Jay; his mother, Linda; his sister Mandy; as well as other family members, coaches and teachers when he signed his letter of commitment to become a preferred walk-on at Troy University.

As a preferred walk-on, Wood is assured a spot on Troy’s roster, but will not be playing with an athletic scholarship. Wood, who played both linebacker and fullback at Morgan, will play fullback for the Troy Trojans.

“He’s worked hard for several years to achieve this goal and we couldn’t be more proud of him,” Jay said.

Jay said he was proud of the way J.R. handled himself throughout the recruiting process. J.R. was recruited by a handful of schools and was offered scholarships to play at Warner University in Florida and University of the Cumberlands in Kentucky, but he ultimately decided Troy was the right fit for him.

“I didn’t want to go that far,” J.R. said. “Troy was the place for me and I wanted to play Division I football.”

Troy finished 4-8 last season, but landed a 25-player signing class this year that ranked second in the Sun Belt Conference by 247Sports.

J.R. embraces the underdog role of being a walk-on and he said he looks forward to getting playing time early in his college career. Although it’s still possible J.R. might redshirt his freshman year, he is hopeful he will make an impact as an underclassman.

J.R. said he initially wanted to play linebacker in college, but he is excited about taking on the new challenge of playing solely offense in a Troy backfield that he said was lacking depth in its backfield.

“I think it’s a good thing having a chip on his shoulder,” Jay said. “He turned down some offers from out of state, but the chance to play for Troy, he loves the coaching staff up there and the facilities,” Jay said.

The Wood family was impressed with the entire coaching staff at Troy, including second-year head coach Neal Brown.

“He’s an outstanding coach and he’s an offensive mind.” Jay said of Brown. “He’s got a good head on his shoulders. “

J.R., who stands at 6 feet and 228 pounds, was told by Troy’s strength and conditioning coach that he is at a good size coming to college.

While J.R. will have to put in the work to get playing time early on, it’s something he’s prepared to do. As a freshman at Morgan, J.R. spent plenty of time getting stronger and better at the game so he could play on the varsity team as a freshman.

J.R.’s family is ready for the next chapter in J.R.’s life. Linda was already wearing Troy colors Wednesday and his grandfather J.R., who graduated from Troy in 1976, was proud to welcome another Trojan to the family.

J.R. isn’t guaranteed to see the field right away, but Jay believes that once he does, it will be hard to take him off it.

“I’d hate to have him hitting me,” Jay said with a laugh.