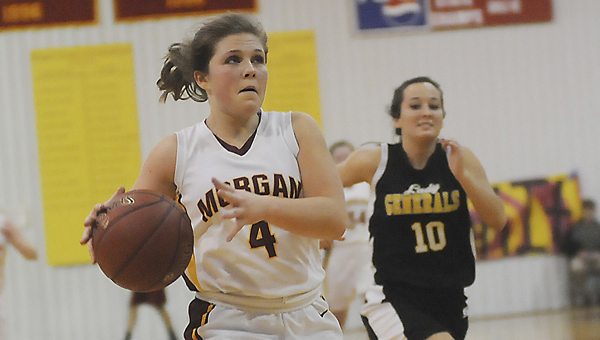 Emily Sherrer races down the floor for a layup during Morgan’s game against Autauga Academy Friday night at home. Sherrer led her team with 14 points, but the Senators fell 51-32. –Justin Fedich

Morgan senior Harrison Adams had the ball in his hands with his team down by two points and 10 seconds on the clock. With space between him and the 3-point line, he did what he had been doing well all night and knocked down the game-deciding shot.

Adams’ third 3-pointer of the game gave Morgan (8-8) its first area win of the season in a 54-53 home win over the Autauga Academy Generals Friday. Woodham Kemmer led the Senators with 21 points, and Sawyer Hopkins followed up his season-high 22-point output Tuesday with 20 points against Autauga.

Morgan head coach Lee Tate was proud of the way Morgan bounced back after falling behind in the second and third quarter.

“Great leadership out there,” Tate said. “Not just making big shots. Their attitudes. They just kind of changed the complexion of the game in the second half.”

While the Senators found themselves trailing by double digits in the second half, Morgan was in complete control early on.

Kemmer knocked down a 3-pointer to put Morgan ahead 7-2, and Hopkins made a layup to give the Senators a 10-2 lead. Adams then made his first 3-pointer of the game with 3:12 on the clock in the first quarter push the Morgan lead to 13-2.

Autauga scored the next five points, but Adams hit another 3-pointer with 1:30 left in the first quarter to give the Senators a 16-7 lead.

The Generals erased the deficit in the second quarter, taking a lead late in the quarter. Two Hopkins layups pulled Morgan within one of the lead at halftime, as the Senators trailed 25-24.

“Sawyer played like a man. He had a great game,” Tate said. “He couldn’t be stopped.”

To begin the second half, Hopkins continued his dominant night near the basket by making another layup while getting fouled to pull the Senators back in front 26-25. The Generals went on a 13-0 run  before Hopkins scored again with 2:39 remaining in the third quarter.

At the end of the third quarter, Morgan trailed 40-30.

Kemmer began the fourth quarter with a 3-pointer, and then scored a two-point shot thanks to a friendly roll off the front side of the rim to bring Morgan closer, trailing just 41-35 with six minutes to play.

Jackson Henderson and Kemmer found Hopkins for layups on back-to-back possessions to cut the Autauga lead to 42-39. Both Kemmer and Henderson then each sprinted for a layup off a turnover to knot the score at 45-45 with 2:30 on the clock.

After an Autauga 5-0 run, less than a minute remained and Morgan trailed 50-45. Hopkins dropped the lead to 50-48 and then Adams shot a 3-pointer from the corner with 10 seconds on the clock to give Morgan a 51-50 lead.

“He wanted it, he was willing to take it,”  Tate said.

“That took some guts. High risk, high reward. And I’m happy for him. What did I think? I was scared to death, but I was mighty happy when it went in.”

Kemmer iced the game from the free throw line, scoring the last three points for the Senators.

“They are the best .500 team in the state,” Tate said of Morgan. “I really believe that. They are better than their record.”

The Morgan Senators trailed early and could never recover.

Head coach Lee Tate wasn’t ecstatic with the outcome, but he was proud of the way his team fought throughout.

“They worked hard,” Tate said. “They really played hard. All of them did and encouraged one another. They never got down. They never quit hustling.”

Morgan got out to a slow start, as Ellie Adams’ two-point shot was the only field goal the Senators made in the first quarter.

Adams, Sherrer, Natalie Henry and Caroline Thomas all got on the board in the second quarter, but Morgan trailed 21-13 at halftime. Frances Henry added two two-point shots in the third quarter to try to keep pace with the Generals, but Autauga pulled away in the fourth quarter to hand the Senators its 10th loss of the season.

Morgan’s boys and girls teams are on the road Tuesday to take on Hooper Academy.

The girls beat Hooper at home Tuesday while the boys fell.