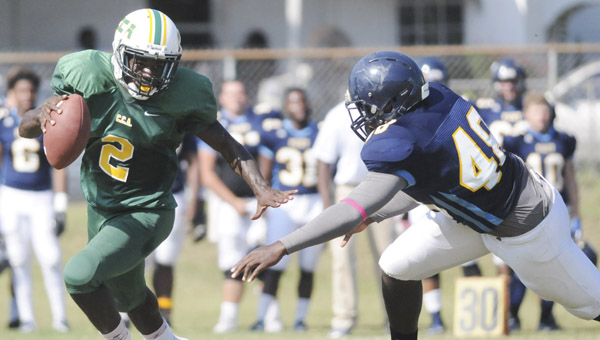 A Concordia quarterback tries to escape a pass rusher during a football game the school hosted on-campus earlier this year. Concordia announced last week that it was shuttering its football program, which was started in 2005.–File Photo

The football program at Concordia College Alabama cost over $500,000 dollars a year to operate and used up roughly one-third of the college’s athletics budget, according to the school’s chief financial officer Dexter Jackson.

The college announced last week that it would shutter the football program, which had existed since 2005. Jackson declined to provide specific numbers, including how much, if any money, the college hoped to save by ending the program.

“We are very hopeful that it will be a positive impact on our budget,” Jackson said.

In a press release sent out last week, Concordia announced the move to terminate the program after an extensive review that covered retention rate, graduation rate, default rate and financial resources. The release cited a mutual decision made by the college’s board of regents and administration staff.

Jackson said the football team had no binding contracts for 2016, meaning Concordia won’t be on the hook for games already discussed between schools for upcoming seasons.

“My office has the responsibility to review and sign all contracts,” Jackson said. “I have not signed any contracts for the 2016-2017 season.”

Jackson said that no other athletic programs at the school will be impacted by the closure of football.

The Concordia football program was funded by tuition, fees that students pay and donations from private donors. Jackson said most football programs are self-sufficient, but that was not case at Concordia.

“We understand this is not going to be a popular decision with our students,” Jackson said.

In 2013, the school lost nearly all of its football equipment in a bus fire but was able to get back on the field due to donations from all over the country. Even the NFL’s Green Bay Packers, who wear similar colors to the Hornets, chipped in uniforms.

However, all the generosity didn’t lead to success on the field.

Concordia has won only two games since the start of the 2013 season. The Hornets went 0-9 in 2015 but had a game it was leading against Clark-Atlanta declared a no-contest due to weather.

“You have to make certain cuts to compensate,” Jackson said. “That’s just the business side. That has nothing to do with the football program being bad for the school. It was just a business decision.”

Jackson said it’s a coincidence that the college was announcing the end of the football program only months later, but was emphatic that it was unrelated.

He said the college reviews all of its athletic and academic programs each year.

“That discussion had nothing to do with the review of football program and ultimately the decision to suspend or remove the program from athletics,” Jackson said. “I know it’s kind of ironic, but we have to not allow a mishap like that to have an impact on future decisions that are not related to it.”

The college said it would honor football scholarships, as long as those students retain a 2.0 GPA or higher.

Jackson said the college will work with any student that wants to transfer to continue to play football.

“If there’s a player that is interested in transferring to another school, we definitely will assist that player in completing their transfer,” he said. “We are not trying to force or hold anyone to any scholarship and aid that signed with Concordia.”

Concordia’s football team played home games at Selma’s Memorial Stadium, but all too often the stands were full of empty seats.

The Hornets played only three home games this year.

Jackson acknowledged that poor attendance was an ongoing problem for football games, but said it did not factor into the decision to cancel the program.

“It was not a determining factor because if that was the case, we would have cancelled the football program a long time ago, if it was based on the attendance,” Jackson said.

Interim city of Selma recreation director Lebo Jones said Concordia and the city have always signed a new contract before each football season, allowing Concordia to play its home games at the stadium.

The last contract expired at the end of Concordia’s most recent football season.

“We liked having them out there and it was good for the city,” Jones said. “A lot of the younger kids went out and watched them play college football … Hopefully, they will be back in the near future.”

The college built an on-campus soccer field in 2013 and many officials had spoken about playing home football games there in the future. The school held a junior varsity game against Point University there earlier this year.

Jackson said the college is working to increase attendance in other sports and to build a fan base around the school’s sports programs.

“We want the community to feel like Concordia College is their college,” Jackson said.