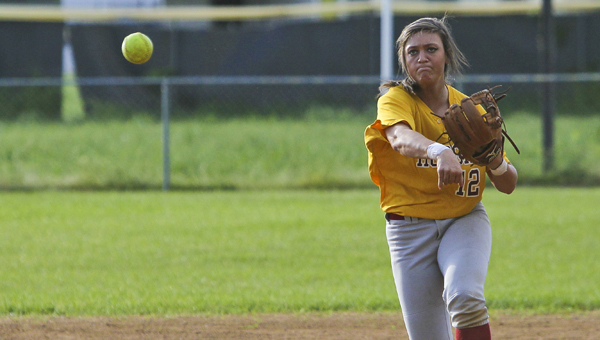 Morgan Academy’s Kendall Veach throws a Meadowview Christian batter out in a game earlier this year. Veach was named the Alabama Independent School Association’s hitter of the year Saturday by the Alabama Sports Writers Association. She will play softball at Auburn University next season.–Alaina Denean Deshazo

Morgan Academy’s Kendall Veach and head softball coach Ed Miller set goals before her senior year in high school. One of those goals was to be named the Alabama Independent School Association’s best hitter, an honor she was recognized for Saturday.

Veach was named the AISA’s top hitter by the Alabama Sports Writers Association, which released its all-state teams Saturday. Veach was also named to the AISA’s first-team all-state.

“It feels good because I know coach Miller and I accomplished a goal we set out for at the first of the year,” Veach said. “I wanted for myself and he wanted for me to be the top hitter in AISA. It happened for me, so I’m very thankful for him for putting up with me for the season and six other years. It was an honor.”

She hit an incredible .605 this year with 14 home runs and 46 RBIs, but her most impressive stat might’ve been her lack of strikeouts. Veach struck out only twice all season.

“One of those I know she was really frustrated because they hadn’t pitched to her the whole time,” Miller said of the two strikeouts. “We were behind in the game, and I think she was just trying to let out frustration. They really weren’t throwing her much to hit so I think one of those times she decided ‘OK, I’m swinging.”

Miller said the most impressive thing about Veach’s season is that as it went on fewer and fewer teams threw anything that the senior had a chance to hit.

“It got to the point where toward the end of the season people wouldn’t even pitch to her,” Miller said. “At times I told her how impressed I was to go up there and not get frustrated.”

Veach also scored 51 runs and had 17 stolen bases. She finished the season with a .712 on-base percentage.

The Morgan Academy graduate spent Saturday playing in Orlando, Fla. with the Birmingham Thunderbolts travel team, which is how she’ll spent the majority of her summer weekends. Veach spent last week cheering on the Auburn Tigers in the Women’s College World Series, where they made it all the way to the national semifinals.

Veach signed to play collegiate softball in Auburn in 2014 and said she cannot wait to get on the practice field with the Tigers.

Veach wasn’t the only Senators player named to the all-state team. Pitcher Margaret Mims was named to the second team all-state and Lauren Criswell was an honorable mention.

Mims finished the year with a 23-10 record and a 1.96 ERA and will play with Chattahoochee Valley next season.  Miller said Mims deserves a lot of credit for the work she put in during the offseason.

He said when the Senators got to the AISA state tournament in 2014, the pitcher had little left in the tank. After pitching nearly every game, she was wore out.

“I could put her at third base, shortstop, second base, anywhere in the outfield,” Miller said of Criswell. “She’s one of those that if someone got hurt and you had to pull somebody you could put her in that spot and feel comfortable.”