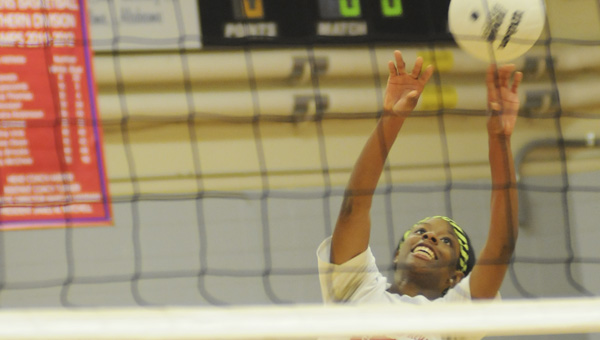 Jamerah Smith stretches to reach the volleyball during a drill Wednesday as part of a volleyball camp at Wallace Community College Selma. The camp is being held by Patriots head coach April Harper, who is helping teach the fundamentals of the game to Dallas County High School students. –Daniel Evans

The basic aspects of any game are something most coaches consider the foundation to success.

“[Tuesday] we worked on floor exercises, agility, station drills, workouts and then we did individual volleyball skill drills in stations,” Harper said. “[Wednesday] we worked on defensive strategies. I have to break it down for them. We are working on strictly perimeter, location, blocking and we did a few drills so they can get comfortable getting to their position on the court. [Thursday] will be offensive strategies.”

Dallas County volleyball coach Linda Moore asked Harper to mentor her students so they could gain some perspective from a college coach on the basics of volleyball.

“[Harper] is someone who has a lot of experience especially on the college level,” Moore said. “It gives her the chance to kind of scout them locally too. Maybe in the next two or three years they will be playing at Wallace under her.”

Harper said it is difficult to know where the students’ talent and skill levels are so she kept the camp very basic.

“We break everything down from passing, serving, hitting and setting to footwork,” Harper said. “Once they remember the basics I start to progress to the more complicated things.”

Moore attended the first day of the camp and said she enjoyed watching Harper’s coaching methods.

“I liked the stations that coach Harper had them in,” Moore said. “They were doing different types of skills and drills. I’m definitely going to continue with them what she has started to make sure that we are at a higher competitive level when our season begins.”

Harper has recruited the majority of her players out of the state the past few years, but hopes that camps like this one will improve the students’ skill levels to where she can recruit more players locally.

“The skill level is improving,” Harper said. “I know because I have been to a few games around town. It’s my wish to recruit more locally. With these girls participating in this camp with me for the first year they are getting to know me. We’re having fun together and hopefully we’re bonding. Once they get ready to graduate they’ll remember me and if I want to sign one they’ll be happy to come on board.”

Moore is glad her students are working on the areas that need work on and grateful Harper is giving them a chance to see what it takes on the college level.

“I’m just hoping that my girls maintain what they have learned and we take it back and work on it in practice to get better and hopefully have a better season this year,” Moore said.

Harper said any other area coaches that would like her to run a camp for their teams can reach her by calling Wallace and asking for the athletics department.