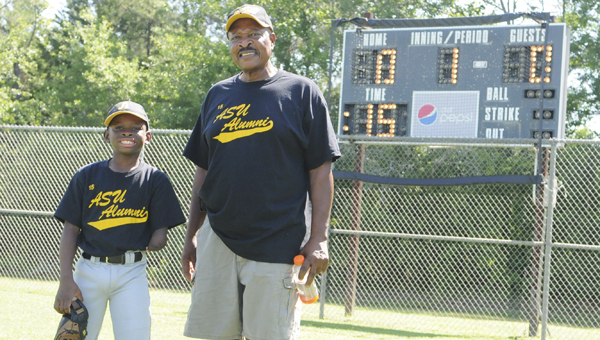 Sherman Norfleet Jr. loves football and basketball and from time to time he even plays a little golf. However, there’s nothing the 11-year-old enjoys more than baseball.

Through it all, Norfleet Jr.  an outfielder on the Alabama State University Alumni baseball team in the city of Selma’s recreation league, may not know it, but he’s serving as an inspiration to many around him.

Norfleet Jr. was born with one hand and a partial left arm, but you’d never know it watching him play. He catches, throws and swings the bat just like those around him.

His dad, Sherman Norfleet, said he wants his son to motivate others.

“It’s not about what you have,” said the dad. “It’s about how you use what you’ve got.”

Father and son always find a place to warm-up before every game and Saturday was no different. Norfleet, who serves as an assistant coach on his son’s team, threw his son pop flies, ground balls and shouted words of encouragement.

“I put a lot of time with my son and we always work harder because we have to work harder,” Norfleet said. “He wants to be the best. He loves the game and whatever he wants to do, I am there with him all day 100 percent.”

Norfleet Jr. played T-ball in Marion a couple of years ago and made the all-star team. He hadn’t played baseball since because Marion hasn’t had a league, but this year the ASU team formed and became a part of the Selma league.

He’s already got four or five RBIs this year, according to his dad.

Perhaps it shouldn’t be surprising that Norfleet’s favorite baseball players are Jackie Robinson and Babe Ruth, two players who influenced the game of baseball arguably more than any players before or after them.

Like Robinson, who broke the game’s color barrier in the 1940s, and Ruth, who pitched and hit his way into the Hall of Fame, Norfleet Jr. is showing that nothing will hold him back.

“It’s always going to be a little adjustment for him but to me it doesn’t seem to bother him,” said ASU Alumni head coach Jeffery Tubbs. “When he gets up to bat, it’s just like another guy up there batting. Same thing when he’s catching. He goes at it.”

Tubbs said he always wants Norfleet Jr. on the side of the field where he thinks the majority of balls are going to be hit because he can always depend on great effort from him.

“He’s not going to slack at it or not give an effort,” Tubbs said. “He’s going to try to catch the ball or field the ball and get the ball back in. I usually put him where I think their best hitters are.”

However, there’s more to Norfleet Jr. than just baseball.

He sings in his church’s choir, loves people and enjoys to fish. Plus, he just graduated from Albert Turner Elementary School and is moving on to the seventh grade. Next year he’ll make the jump to Francis Marion High School, but he said he isn’t nervous.

That isn’t surprising, as Norfleet Jr. continues to show the world what’s possible with hard work and determination. If he stays the course, high school might be a breeze.

“I thank God for him,” his dad said. “I have daughters but I only have one son. I blessed him with my namesake and I’m really proud of him.”