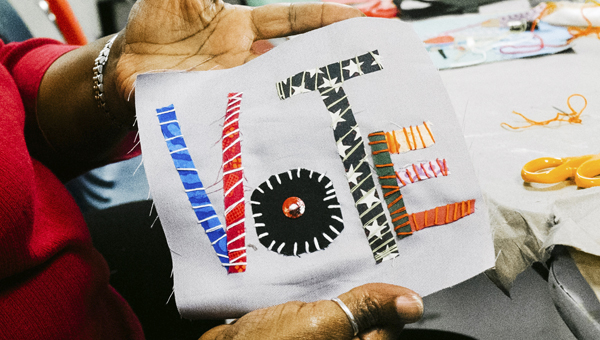 UAB will collaborate with other organizations to create commemorative quilts for the anniversary of the Selma to Montgomery marches.

The art of sewing is said to mend the soul, and hundreds of people will sew together over the next two months to create commemorative quilts for the 50th anniversary of the Selma to Montgomery March.

The University of Alabama at Birmingham’s Department of Art and Art History is collaborating with Bib & Tucker Sew-Op cooperative and other organizations to host open sewing sessions during January and February.

“It’s kind of like the old quilting days,” said Jared Ragland, visual media & outreach coordinator for UAB’s Department of Art and Art History. “You sit around the table and sew, and you talk and tell stories.”

The sewing sessions are open to anyone regardless of age or sewing experience.

“The project invites folks to come and sew seven-inch quilt blocks that illustrate something significant or something personal about the Civil Rights Movement or about the March from Selma to Montgomery,” Ragland said.

Once the blocks are complete, they will be sewn together into two large quilts.

“Those quilt blocks will then be combined into really large narrative story quilts,” Ragland said. “Those quilts will then go on exhibition in Selma, Montgomery and Birmingham at the time of the anniversary of the march.”

Lillis Taylor, executive director of the Bib & Tucker Sew-Op, hopes the project will unite people during the historic celebration.

Taylor said she hopes it lets people in Selma know how important the march was to not just them, but for everyone.

“I hope that it would show solidarity in terms of we know that this is an important and momentous anniversary,” Taylor said. “We just want our neighbors to the east to know that we are paying attention to the history and want to celebrate it as well.”

Taylor said a sewing session is in the works for Selma later this month.

For a full list of sessions in Birmingham, visit the UAB Department of Art and Art History’s website. Anyone is encouraged to attend the sessions, and all supplies are provided by the “March Quilts” project.

To hold an open sewing session, contact Jared Ragland by email at raglandj@uab.edu.