Blue Devils hang on for victory over Bulldogs 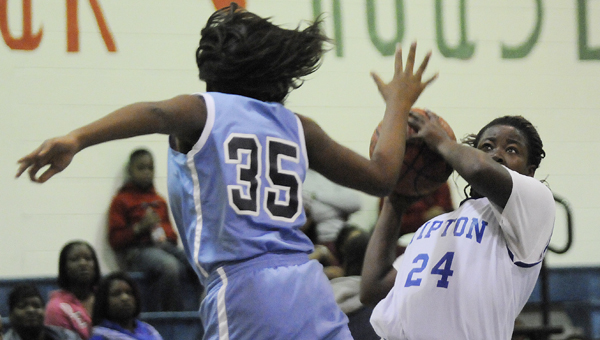 Tipton’s Christina Watts, right, goes up for a shot in front of the outstretched arm of Martin’s Aaliyah Hatcher in Thursday night’s game at Tipton-Durant Middle school.–Daniel Evans

Tipton-Durant held off a fourth quarter run by Martin Middle Thursday to hang on for a 37-24 victory.

The Blue Devils (4-1) were led by Christina Watts’ 14 points, and Destiny Davis’ eight to take a 22-2 lead at the half, only to endure a long scoring drought and watch Martin (2-3) pull within 10 points in the second half.

Part of that was due to an injury to Davis, who returned in the fourth quarter after going down with what appeared to be a knee injury.

“Our main player went down, so when she went down we sort of lost that momentum,” Tipton coach Leonard Jones said. “Once she went down, we started turning it over.”

After not making a single field goal in the first half, Martin held Tipton scoreless in the third quarter to inch back into the game. Part of the slow start was due to the Bulldogs had several players miss the first quarter due to a disciplinary issue.

“I had to sit a few players out because of how they acted in class today and that showed,” Martin coach Robin Condra said. “The point was proven that if we behave when we need to behave the game should have turned the opposite way, but I told them at halftime they can either go out there with their head beat down or play ball like I know they can.”

The slow start ended up biting the Bulldogs. Tipton jumped out to a 15-0 lead after the first quarter and led by 20 at the break after Martin could manage only two made free throws for points.

Ellwood Christian’s Michael lewis looks toward a Billingsley player during last week’s loss to the Bears in the second round... read more