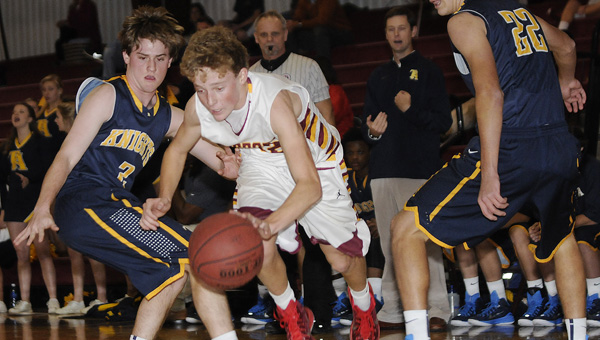 Morgan Academy was unable to keep up with fast-paced Tuscaloosa Academy Tuesday night, as the Knights raced up and down the court for a 63-41 victory.

Tuscaloosa (3-0) is the defending AISA AAA state champions and showed why Tuesday night, jumping out to a 16-4 advantage and not letting up until the game was well out of reach.

“I told the guys in there that’s a really good team,” Morgan Academy head coach Jacob Lyon said. “They are the defending state champs and tonight they were 22 points better than we were. We are going to continue to improve.”

Morgan (1-1) fans came out in full force, as the bleachers were full at tip off.

The student section revived the “Ballheads,” a group that once dressed up and cheered on the home team. Each member of the group wore a basketball on their head and they made lots of noise, but nothing seemed to faze the Knights.

Tuscaloosa got layup after layup in the first few minutes, opened up a 12-point lead midway through the first quarter and never let the Senators get closer than 10 the rest of the way.

The lead got under 20 one time in the second half, on a John Ross Bone three-pointer with 5:15 left in the third quarter.

Tuscaloosa put its foot back on the accelerator and upped its lead to 47-24 after the third quarter.

“They did a really good job of taking advantage of our mistakes,” Lyon said. “That is the advantage of being in the same system for five years.”

Every time the Senators found a basket, the Knights seemed to race the ball up the floor before Morgan could get their defense set up to steal a quick score right back.

“We are building our whole system around transition and pressuring,” Tuscaloosa head coach William Johnson said. “If the other team scores, it is a quick switch offense. That possession is over. We want to get the ball back down the floor as quick as we can.”

Sawyer Hopkins led the way for Morgan Academy with 10 points, with six of those coming in the final quarter.

Tuscaloosa Academy had 11 players score in the game, with Harrison Standeffer leading the way with 12 points.

The Lady Senators (1-1) had a scoring drought near 16 minutes long in the second and third quarter, bookended by baskets from leading scorer Kendall Veach. Veach scored six of the Senators’11 points.

“We moved the ball well but we had too many turnovers,” Morgan Academy coach Jeremy Carter said. “The effort was there. We just need to be a little more aggressive.”

The Lady Senators had no answer for Tuscaloosa’s McKenzie Smelley, who was the game’s leading scorer with 13 points. Carter said with time his team will get better at defending the post.

The Lady Senators trailed 8-4 after the first quarter and 14-6 at the half.

Morgan did not score in the third quarter, as Tuscaloosa (3-0) upped its lead to 22-6. The Lady Knights pulled away in the fourth quarter, scoring 19 points and pleasing head coach William Johnson.

“I challenged our seniors at halftime to get focused and get team focused and I think they did a good job in the second half,” Johnson said.