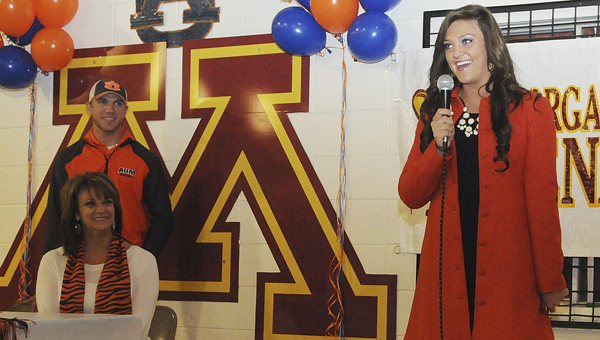 Morgan Academy softball star Kendall Veach thanks friends and family for coming Wednesday to celebrate her signing with the Auburn Tigers. –Daniel Evans

With family and friends by her side, Morgan Academy senior Kendall Veach signed the necessary paperwork Wednesday to become an Auburn Tiger, making a childhood dream come true.

Veach, a standout softball player for the Senators, verbally committed to the Tigers earlier this year, but signed her letter of intent in the Morgan Academy gymnasium Wednesday to make it official.

“I’ve been dreaming about this since I was five and could even pick up a softball,” Veach said. “It’s just — wow. I’m just at a loss for words.”

Veach hit around .450 last year for the Senators and hit 14 homeruns, but she spends most of her offseason time playing travel softball for the Birmingham Thunderbolts, who play all around the country.

“Kendall is bar none above her level,” Thompson said. “She is an awesome player and she does things that are uncoachable. She is a natural ball player with a good attitude, hard working and she makes her teammates play to her level.”

Veach has played with Thompson for the last 18 months, but before that she played for Gallardo for a decade.

“She is one of those players that coaches just dream of,” Gallardo said.

With playing so much travel ball, there were many events Veach had to miss over the years. Her parents, Debbie and Donnie and her brother, Hunter, were her biggest supporters through that time as she played all over the United States.

Veach is excited to get started at Auburn, but is looking forward to the rest of her senior year first.