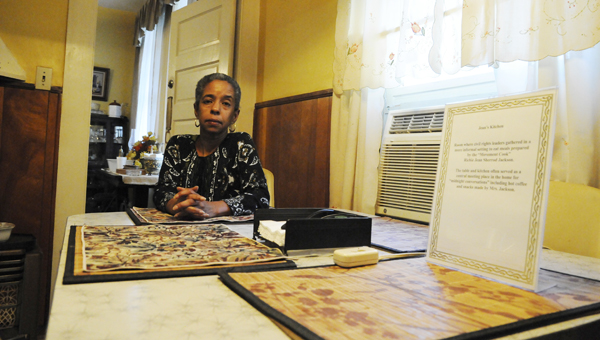 Jawana Jackson sits in her late mother Richie Jean Sherrod Jackson’s home Tuesday at the kitchen table where civil rights leaders, such as Martin Luther King Jr., sat to discuss plans for the historical 1965 march from Selma to Montgomery. The home served as the informal headquarters to civil rights leaders during Selma’s Voting Rights Movement.

The 50th anniversary of the 1965 Selma to Montgomery march is months away, but plans to publicly open a home that played a vital role in the movement are already underway.

Located at 1416 Lapsley St. in Selma and built in 1912, the Jackson House served as headquarters in the planning of the historic march from Selma to Montgomery that led the Voting Rights Act of 1965.

While the inside of the home has been seen by a few, the home has never been open to the general public for viewing, but that’s about to change.

“Now that both of my parents are gone, in particular my mother who was living here, I just feel it’s my duty to let the public know about a very, very special piece of history that happened here,” Jawana said.

Richie wrote a book called “The House by the Side of the Road: The Selma Civil Rights Movement” that chronicles her journey growing up in Alabama during the 1930s to the 1965 Civil Rights campaign in Selma. It mentions Dr. Martin Luther King, Jr., Dr. Ralph Abernathy and the other advocates temporarily sharing the home, which was listed on the National Register of Historic Places on Jan. 8, 2014.

Jawana was younger than 5 when her home stood as the place where decisions that changed the nation and reverberated around the world were made.

“It has been an incredible journey to have lived my life in this home of two people that, in some small way, gave their home so that my future and the future of those around the world could experience freedom,” Jawana said.

Because the home is so important to countless people, Jawana would like to make sure generations get to experience it.

“We were in the line of danger. There is no question about that, and my father and mother took that into consideration,” she said. “They felt that the dangers were second to the advantages and what the struggle really was about.”

Led by Jawana, the nonprofit organization The Jackson House Foundation and Museum Inc. will be created as a result of the new museum and be dedicated to preserving the Jackson Home.

The date for the grand opening of the museum has yet to be determined.

“This an opportunity for me to now only give back to my hometown, but its also an a very, very unique piece of history,” Jawana said.

Something ‘Blue’ now in gallery

Artwork hangs in The Art Guild gallery, waiting to be viewed and voted on for the juried competition Nov. 9.... read more