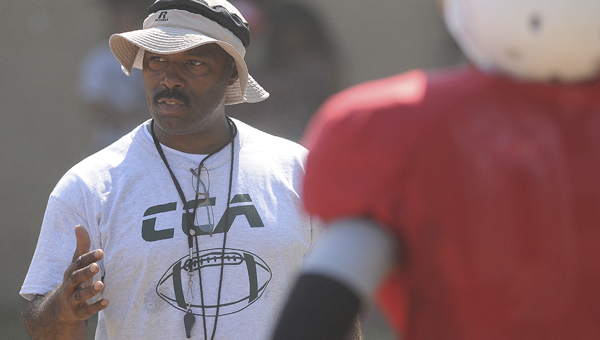 Conner, who had a heart stint put in following a mid-game heart scare against Southeastern University, has been coaching the Hornets from the press box the last few weeks, but it’s not because his health is holding him back.

Conner said he’s coaching the team from the press box at games because the team is short staffed and because it allows him to get a better view of the field.

“I see how everybody is moving and I see what I like and what I don’t like,” Conner said. “I really can see it. When I’m on the sideline I never really see what’s behind me, but when I’m up there I see everything.”

Conner said when he started feeling wrong in the game against Southeastern, he requested he be taken to the hospital. Given his experience with heart issues — he had a heart attack in 2008 when coaching at Benedict College — he knew to take it serious.

“I could tell something wasn’t quite right,” Conner said. “Normally in a situation like that, I come in and cool down. I couldn’t cool down. When it comes to that, I don’t take any chances.”

Looking back, it was a good thing he did.

Conner admitted he’d probably gotten away from his diet a little bit after his first heart procedure.

“My diet is very strict and I did kind of get away from it. I was doing baked [foods] but I was doing it at fast food restaurants,” Conner said.

His hours had also started to climb towards 15 and 16 hour days, since he arrived at CCA at 4:30 a.m. to prepare for practice and stayed until well after 5 p.m. to meet with players who had late classes. He’s doing his best to maintain his hours now, while also trying to turn the Hornets’ football program around.

Conner has always had a prolific rushing offense going back to his days at Alabama A&M and Benedict College, but the Hornets have been a lot going offensively this season. Concordia’s only win of the year came against Point University earlier this year. Since then the Hornets have lost close games to Ave Maria and Warner University. Against Warner a potential game winning touchdown was called back because of a block in the back penalty.

Last week in a 55-0 loss to Samford, Conner said the Hornets’ had wide open receivers, but couldn’t take advantage. He said it all boils down to execution but that he knows his offense will work if run correctly.

“I feel good about where we are and we are just going to move on,” Conner said. “We are going to mature our team. We don’t have any seniors… so we are relatively young.”

Saturday’s game at Delta State is scheduled to start at 1 p.m.

Ellwood Christian quarterback Jalen Furlow reaches for a first down in a game earlier this season versus Akron. The Eagles... read more