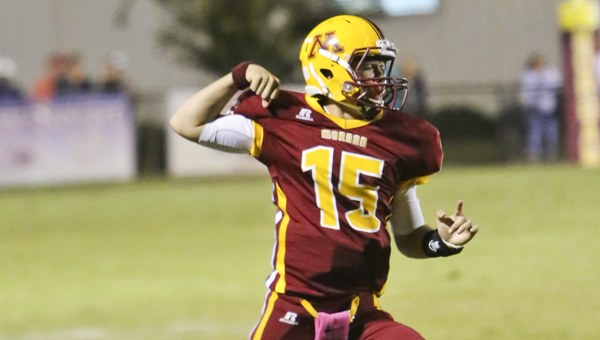 A clash of the winless meant one team was going home with their first win of the season Friday night at Morgan Academy.

The Senators fought hard for four quarters, but couldn’t shake Hooper Academy until John Ross Bone made a 15-yard field goal in overtime to put Morgan up 24-21.

Hooper’s tying field goal attempt minutes later missed wide left, giving the Senators — who entered Friday’s game without a win — a reason to run on the field in jubilation.

“It’s a huge win for our program,” Morgan head coach Jake Wingo said. “Our guys played their hearts out.”

The momentum was the difference in the game, and it was a constant battle all night for the lead.

“It was a game of momentum swings, and luckily we had one more than they did,” Wingo said.

While Bone’s kick saved the night for the Seantors, the Colts weren’t as lucky.

“It’s very disappointing for everybody,” said Hooper head coach Steve McCord. “We just had a lot of things to go against us all year, of course some of it’s our fault… I just hope we can continue to get better and hope we have a chance to win next week.”

Morgan opened up strong with Harrison Adams throwing a pass to Woodham Kemmer who caught it for an 80 yard gain, which spotting the ball at the one-yard line. Just a few plays later, Adams would throw in the end zone to Jackson Henderson to put the Senators up 6-0 early in the first. Bone added the extra point to make it 7-0.

“We started off fast, we got ahead, and I think that was key for us,” Wingo said.

With only 37 seconds left in the first half, Kemmer would run for 1-yard for a Senators touchdown. Bone’s extra point was good, tying the game at 14 at the end of the half.

After missing an early second half field goal, Hooper would still get the lead in the third.

The Colts’ DJ Thomas ran for a 17-yard touchdown, and with the extra point brought the score to 21-14.

Morgan would answer in less than 30 seconds with Adams throwing to Kemmer for another 80-yard touchdown pass.

Bone tacked on another point, evening out the score at 21, where it would stay until the end of the fourth quarter.

Morgan will host Clarke Prep next week in its season finale.

EMCA pulls away from Meadowview in second half