In just a few years, Yeargan Farms has seen its business flourish 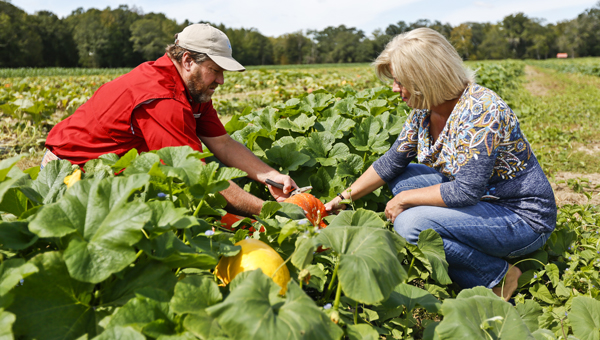 Chuck and Angie Yeargan harvest a pumpkin from their pumpkin field recently to be used at their annual Pumpkin Patch at Yeargan Farms.–Alaina Denean

With Alabama’s summers often complete with scorching hot, rainless days, growing pumpkins in the state is a truly an accomplishment.

Yeargan Farms has taken on the challenge every fall since they began two years ago, and its owners are happy to report they’ve grown eight acres full of pumpkins this year.

“Pumpkins don’t like the heat, and they need a lot of water, so this year has been extremely tough,” farm co-owner Chuck Yeargan said. “Our successful pumpkin patch has just been unreal.”

Through experience, the Yeargans have learned easier, quicker and more productive ways to maintain their pumpkins, which have grown to various sizes this year.

“With the giant pumpkins, there are a lot of different techniques that people use to make sure that one particular pumpkin is getting the nutrients others aren’t,” said Angie Yeargan, Chuck’s wife and Yeargan Farms co-owner. “There are a variety of techniques and you just have to play with it and see which ones work.”

An essential step that has made it possible for farm employees to produce pumpkins of all sizes is eliminating and preventing critters known to eat pumpkins, like squash bugs.

The germination period is 110 days for pumpkins, but it’s subject to change when those pumpkins are grown in certain conditions, Chuck said.

Chuck said he and his workers have adopted methods that can reduce the two hours it normally takes to plant a row of pumpkins to only 30 minutes.

“Last year when we made pumpkins, it rained almost every day in 56 days,” Chuck said. “This year it took 140 days to make them. They aren’t quite as big, because of the heat and the drought.”

Even with the shortcuts, the job still took four to five hours each day for nearly the entire summer.

While the long workdays have left the married couple with few vacation days, they feel it’s well worth it when they are able to harvest countless pumpkins. The orange-yellow fruits are the farm’s biggest source of revenue during the fall.

Not only does the successful eight-acre pumpkin patch allow the farm a revenue source, but it also helps the farm bring in hundreds of guests and produce meaningful fall memories with its Pumpkin Patch event held from late September through Oct. 31. Within that time, the farm will be open Friday and Saturdays from 10 a.m. to 6 p.m. and each Sunday from 1 p.m. to 6 p.m.

Guests will have a chance to enjoy the farm’s inflatable park, load-up for a wagon ride to the pumpkin patch, explore the corn maze, ride along for a hay ride, visit the Petting Zoo, dig in the Corn Crib, slide out of a hay maze, hop on the cow train, flip and ride on the 4-station bungee trampoline system, shop at Gigi’s General Store and much more.

The farm uses its pumpkins to decorate the event and provide to those who join the Pumpkin Patch events.

“Everybody that comes usually wants a pumpkin,” Angie said. “I’ll meet a few who come back and may just want to come back to play, but we have to make sure we have plenty of pumpkins — its crucial.”

About 90 percent of the pumpkins come from the farm while the others pumpkins, which are pink, are provided by another farm.

Normally, the farm collects seeds from a company that stocks pumpkin seeds that can produce colorful pumpkins, such as pink and white. Because the company ran out of seeds for the pink pumpkins before Yeargan Farms could purchase some, the farm wasn’t able to produce any this year.

Chuck said he is proud to see his vision for the Pumpkin Patch, which was inspired by his desire to surround himself with the farm, grow more successful each year.

“I wanted an excuse to be over here,” Chuck said with a laugh. “I just liked it over here and everything was already pretty much laid out for it.”

Angie has supported her husband’s vision since day one, because it presents a great opportunity to share their pumpkin patch blessing with the community.

“We’ve always like to have it open for our friends, family and anyone that just wanted to come out enjoy the farm,” Angie said. “We feel God has blessed us with it, and hopefully we’ll be able to bless others.”

Hancock has continued his family’s love of cooking

Hancock’s is known for its delicious barbecue. –Alaina Denean By Alaina Denean The Selma Times-Journal A good story, an old family... read more