Historic march was a turning point for Brown 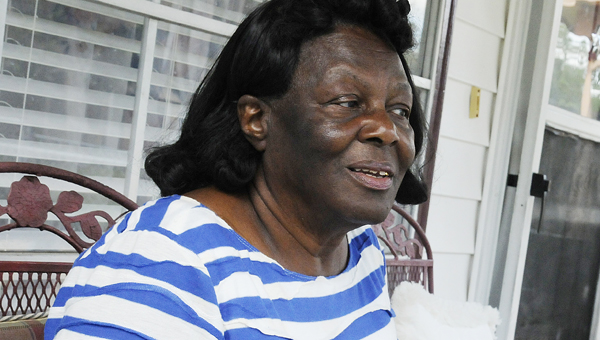 Susie Brown recalls Wednesday her experience in the 1965 march from Selma to Montgomery. (Sarah Robinson | Times-Journal)

When Selmont resident Susie Brown reflects back on her lifetime, she can’t help but recall her experience in the 1965 historical march from Selma to Montgomery.

Not only was Brown’s decision to march a threat to her life, but it was also a threat to her job. As a single mother, Brown was dismayed to learn she would no longer be employed if she participated in the march for equal voting rights.

“That kind of struck me,” Brown said. “ [My boss] said, if we marched, we wouldn’t have a job, and I didn’t have a husband at the time. That [job] was my only income.”

After praying about the dilemma, the Selmont resident said God guided her to participate in the march with the fear of the outcome far from her mind.

“I thought, I’m going to do what I have to do,” Brown said. “A lot of folks get scared and run. But if the Lord is for you, nothing is going to happen to you.”

Brown said she had mixed emotions, both sad and happy, as she took part in the march, which resulted in the signing of the Voting Rights Act on Aug. 6, 1965.

“The black young men that were in the march made me proud of them,” Brown said. “They sung, ‘we may not have a cent to pay the rent, but we’re going to make it. And we made it.’”

As Brown told her story, her voice began to tremble and tears filled her eyes.

“The sadness of it is how a human being could do another one like that,” Brown said. ”That’s what makes me cry.”

Alleged robber shoots victim in hand, himself in leg during scuffle

A Selma man is behind bars after allegedly shooting another man and himself during a robbery, according to the Selma... read more