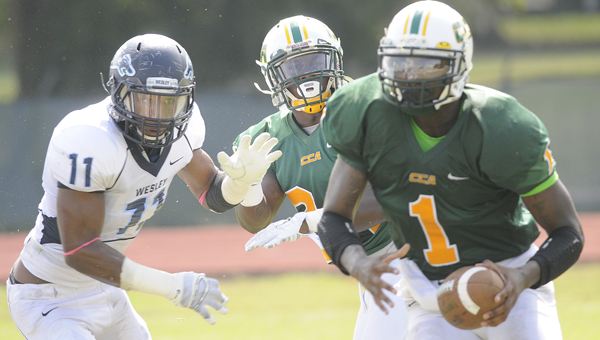 In hindsight, the Concordia College Alabama Hornets probably wish Saturday’s homecoming celebration had ended with the pre-game parade, because the football game did not go as planned.

The Hornets were shutout by Wesley College 54-0 Saturday at Memorial Stadium, giving current students and former alumni little to cheer about.

Conner was probably the only Hornet taking a step forward. Just three weeks ago, he left Concordia’s game against Southeastern and later learned he had suffered his second heart attack in six years. Conner sat in the press box Saturday and didn’t like what he saw, but he did say his health is improving.

“Everything is fine,” Conner said. “I’m just trying to take it easy and get back into the swing of things.”

Conner said he is waiting on a doctor to say he’s cleared to return to the sidelines.

Wesley had no problems moving the ball Saturday, but Concordia mistakes set the Wolverines up in great field position. The Hornets turned the ball over six times and gave up 404 yards of total offense.

An opening punt from the Concordia 25-yard line went backwards after a roll that benefited the Wolverines. Five plays later Wesley’s Joe Callahan found Steve Koudossou for an 11-yard touchdown with 6:30 left in the first quarte to open the scoring.

The game’s next points came on a Wesley safety, as the Wolverines tackled Matthew Rowser in the end zone with 3:02 left in the opening quarter.

Callahan capped the first half scored with a 38-yard touchdown throw to Brandin Somerville to make it 19-0 Wesley before halftime.

Wesley broke the game wide open on the opening kickoff of the second half. Bryce Shade took the kick and ran it back 83 yards down the home sideline to make the score 26-0 Wolverines.

“That’s one of those ones,” Wesley head coach Mike Drass said. “If you look at the eight plays that change a game that certainly was one of them today. That set a tone in the second half.”

The Wolverines scored a total of 28 points in the third quarter to put the game out of reach.

Callahan threw a 54-yard touchdown pass to Jamar Baynard, Aamir Petrose returned a fumble 19 yards for a score and Robert Wiggs caught a 22-yard pass from Zach Smith to make it 47-0 after three quarters. Wesley tacked on one more touchdown in the fourth.

Concordia will travel to take on Central State next week.

Selma’s Lekedrich Rogers attempts to catch a one-handed pass during the first half of Friday night’s game against Bessemer City.... read more