Hornets finally break through, pull away from Oakwood 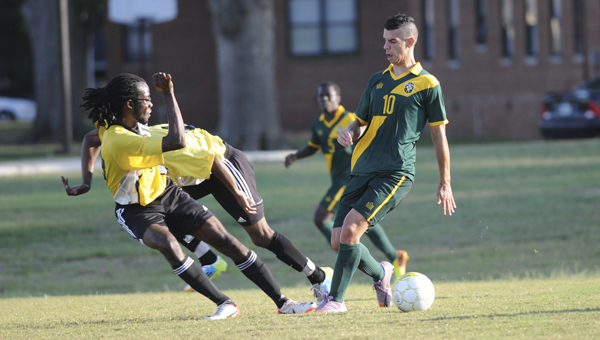 Right before halftime in Saturday’s soccer match against Oakwood University, Concordia College Alabama players were frustrated and they probably had a right to be.

The Hornets had attempted nearly 20 shots and were still locked in a scoreless tie against Oakwood in a game that appeared to only be close on the scoreboard.

Concordia finally broke the tie, as Diego Outeiral and Olakunle Sunday Ogundipe scored goals in the final five minutes of the first half to give Concordia a small, but comfortable 2-0 lead. The Hornets (8-4) rolled from there to a 4-0 victory

“You have days that go like this,” CCA head coach Emanuel Stephens said. “You have a bunch of chances a lot bunch of things that go your way but at the same time you just don’t capitalize.”

The Hornets kept the momentum rolling in the second half as Danilo Silva scored in the opening minutes to make it 3-0 Concordia. Outeiral added another goal just a few minutes later to make it 4-0 and the Hornets held on from there.

It was a tough match for Huntsville-based Oakwood, who was without several key contributors.

“I don’t want to make excuses but we have five key players that were not able to come today,” Oakwood coach Clement Holder said. “… We had a lot of lapses.”

Yet, it could have been a lot worse. The Hornets attempted over 30 shots, with the majority of those coming in the first half.

“We have over 30-something shots and we only scored four,” Stephens said. “That’s a frustrating part of the situation.”

For Concordia, Tuesday’s game was another stepping stone towards the United States Collegiate Athletic Association’s national tournament, which will be held at West Virginia Tech Nov. 5-8.

“If we take care of the next few games, I think we will definitely be [in the tournament],” Stephens said. “We may have a game like this in the national tournament and have chance after chance. We have to not get frustrated and not be too upset with ourselves where we can’t play the game.”

Concordia will host Tennessee Temple Friday in what Stephens said will be a big test for his team. The game is scheduled to start at 4 p.m.