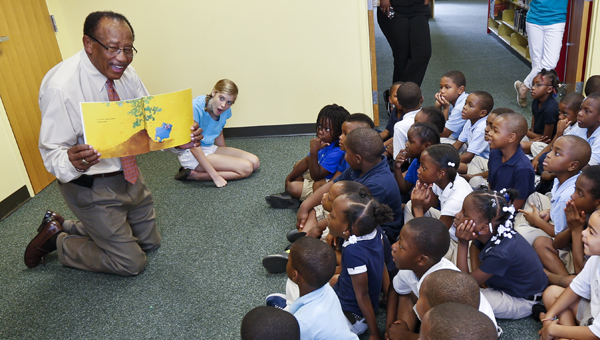 The “Welcome To Your Library” campaign at the Selma-Dallas County Public Library is coming to a close for 2014, having registered 633 first graders for their very own library cards.

There to help bring the campaign to a finish was Selma Mayor George Evans.

“Even though I’m big and grown now and may be mayor of the city, I was a first grader too at one time,” Evans said.

The mayor read to the first graders of Payne Elementary on Tuesday as part of the campaign.

“Having been a former educator, I enjoy working with younger people, and I enjoy reading to kids,” Evans said. “Right now they’re getting those basic fundamentals that are so important in preparing them to read even better as they get older.”

Evans was once a first grader at Payne Elementary and said he likes having the opportunity to go back to his roots and read to children now walking the same halls he once did.

“It’s exciting to come back and tell them I used to be a first grader and I actually, in fact, went to Payne School,” Evans said.

The mayor commended the library staff for their outstanding work when it comes to first graders and the campaign.

“The library here is excellent,” Evans said. “Ms. Becky [Nichols] does an outstanding job of working with the children in the city of Selma and the county.”

Kelvin Jackson, a first grader at Payne Elementary, said he had fun getting to go to the library and was happy about getting his own library card.

“I’m excited to be here,” Jackson said. He added it “was cool” to meet the mayor.

Evans said he was impressed with what words the first graders already knew and praised their teachers for their dedication in preparing students.

“I’m amazed at the fact when I mentioned the word enormous, they could tell me that was big,” Evans said.

He said he hopes students understand the importance of being able to read.

“I think it’s an excellent program, and I’m just happy to be asked to be a part of it each year,” Evans said.