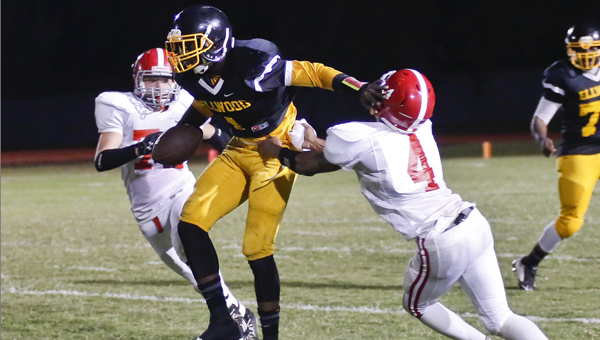 For most teams, the high school football season has hit its halfway point and in Dallas County there have been several surprises and many disappointments.

The team with the best record at the halfway point is Selma (4-2), closely followed by Ellwood Christian (3-2). Those two teams will close their seasons against each other on Halloween night, but before then we will likely know a lot more about each of them.

Let’s look back at what has transpired so far:

Team that has surprised us:  Ellwood Christian

The Eagles won only two games last year and entered 2013 on a seven game losing streak, but head coach Eric Martinear appears to have turned the program around in his short time at the helm. Ellwood has won three of its first five games and one of the Eagles’ defeats was a forfeit against Sunshine. Naysayers will say Ellwood still has the meat of its schedule left and they’d be right. Back-to-back games against 1A powers Linden and Maplesville lie ahead in the next two weeks, but even if both of those games result in defeats, it shouldn’t diminish what Ellwood has already accomplished this year.

Ellwood has used a high flying passing attack and great performances from quarterback Jalen Furlow for its hot start. The Eagles’ defense has to improve if the team is going to keep its momentum rolling. Verbena seemed to do whatever it wanted on offense last week, scoring on every possession the Red Devils didn’t turn the ball over.

Team we expected more from: Keith

Keith has been the most consistent program in Dallas County over the last decade, making the playoffs six consecutive years, but the Bears look like a different team this year. The departure of quarterback Maurice Crumpton and other seniors in recent years has depleted the roster and left Keith with a much younger team that still needs some time to come together.

But it should be noted the Bears, unlike rival Ellwood, have already played the toughest part of their schedule. Games against 6A Selma, 4A Southside and Linden and Maplesville are already behind them. Can the Bears recover in the second half of the season in time to keep their playoff streak alive?

Selma-Hillcrest took two days to complete and it was still worth it. A lightning delay forced the game to be suspended until Saturday after Hillcrest scored an early touchdown, and the Saints came out ready to play Saturday. Selma took a late lead on a touchdown run with just over a minute remaining, only to watch Hillcrest drive the field and score with 12 seconds left to stun the Saints. A win for Selma would have been one of the biggest in Leroy Miles’ tenure with the school.

Selma — B
If the Saints had found a way to win at McAdory two weeks ago, or at least be competitive, this grade would be higher. Miles has clearly built a year in, year out contender at Selma and it’s hard to knock them for the loss to Hillcrest, which would have been one of the biggest wins for Selma in a long time.

It’s important to note that Selma quarterback Jesse Boggs is out for the season with a torn ACL. His absence could have a big affect on how the rest of the season plays out for the Saints. Region games against Brookwood, Bessemer City and Northridge are ahead. Selma probably needs to win two of the three to make the postseason for the second straight year.

With the running game the Saints have, with Kendarious Merchant leading the way, this team should be just fine.

Meadowview Christian— B
Meadowview made the move to 8-man football in part to be more competitive and so far it has worked. The Trojans already have more wins this year, two, than they had last season. The only two losses Meadowview has are to really good teams in Hope Christian and Victory Christian too.

The Trojans’ great start comes after the loss of one of their leaders in Wesley Gunter, who was lost before the first game to a knee injury. C.J. Grimes has been incredible and leads a much improved offense. Four of Meadowview’s last five games are at home.

Ellwood Christian — B-
It almost feels wrong saying the Eagles are 4-2 with a loss at Sunshine, but that’s how the record reads following the forfeit earlier this year. It’s not fair to punish the players for that defeat though. If anything this grade says more about the Eagles’ performance last week against Verbena — a 56-28 loss against the best team they’ve seen this year — and the need to improve before games against Linden and Maplesville.

Southside — C
The Panthers are clearly on the rise, despite some injury concerns early in the year.Southside deserves credit for the way it has handled its quarterback situation. Preseason starter Khamari Gibbs continues to battle a hamstring injury that keeps him sidelined, but Scott Cole has filled in perfectly,

Southside has already equaled its win total for the last two years with a 3-3 start this year, but every win has come against winless foes. We are ready to see Southside get a signature win against a team they aren’t expected to win against. Three chances to do that remain on the schedule after a bye week — W.S. Neal, UMS Wright and Clarke County.

Dallas County — C
The Hornets have been more competitive this season and defeated Sumter Central two weeks ago for their first win of the year. The schedule hasn’t been easy and it doesn’t get easier, but sometimes improvement comes in slight gains and not in leaps and bounds. At the beginning of the year, we probably would not have written that Dallas County could pull an upset against a contender down the stretch, but at this point the Hornets appear ready to do just that. Don’t be surprised if it happens.

Morgan Academy — C
It’s hard to imagine another team in the state, or at least in the AISA, had a tougher stretch to start the season than the Senators. Two early Morgan opponents Monroe Academy and Edgewood Academy appear to be marching to state championships again.

Early on not a lot has gone right in Jake Wingo’s first season at the helm. The Senators have struggled to score on offense and have not had a lot of luck slowing people down either. However, it’ll be much more fair to evaluate the Senators at the end of the year, after the schedule gets a tad easier to navigate.

Keith — C
Even in Keith’s playoff years, I’m not sure how many times the Bears would have been expected to win against Selma, Linden or Maplseville — schools Keith has only beaten a handful of times in school history. The losses against Southside and Ellwood Christian, which were largely uncompetitive, worry us more, but let’s write them off to a tough schedule. This program isn’t going to let its playoff streak go down without a fight.

West Alabama scored eight rushing touchdowns, getting points on each of its first seven possessions, on the way to a... read more